Battle Lines in Libya Reflect a Similar Fight as in 2011

About a week ago I promised a post on the current Libyan civil war.

I've done my research and started out a bit perplexed. But the battle lines now seem to make sense.

As an intro, it's worth noting that the current situation is at a ceasefire between the Tripoli government and the probably-more-legitimate Tobruk government, with talks on a unity government apparently happening. This is particularly good news because--as has been pretty common in Middle Eastern civil wars of late--the chaos has allowed ISIS and its other radical allies to gain a footing.

Much like can be said of Syria: only after the civil war ends can any real action happen against ISIS.

I won't give a summary of the 2014 civil war, as Wikipedia (as usual) actually does a fairly admirable job. But I will give a brief summary of the combatants, as it gets really complicated.

In 2014, the pro-Islamist GNC was defeated handily in elections, but did not step down. They call themselves the "New GNC" and operate out of Tripoli. They are allied with Libya Dawn and other Islamist groups. The recently-elected representatives call themselves the House of Representatives and operate out of Tobruk. I am calling them the "new regime" at times. They're allied with the regular armed forces of Libya.

I became particularly interested in what was going on when I noticed that the battle lines in 2014 are surprisingly similar to those from 2011: 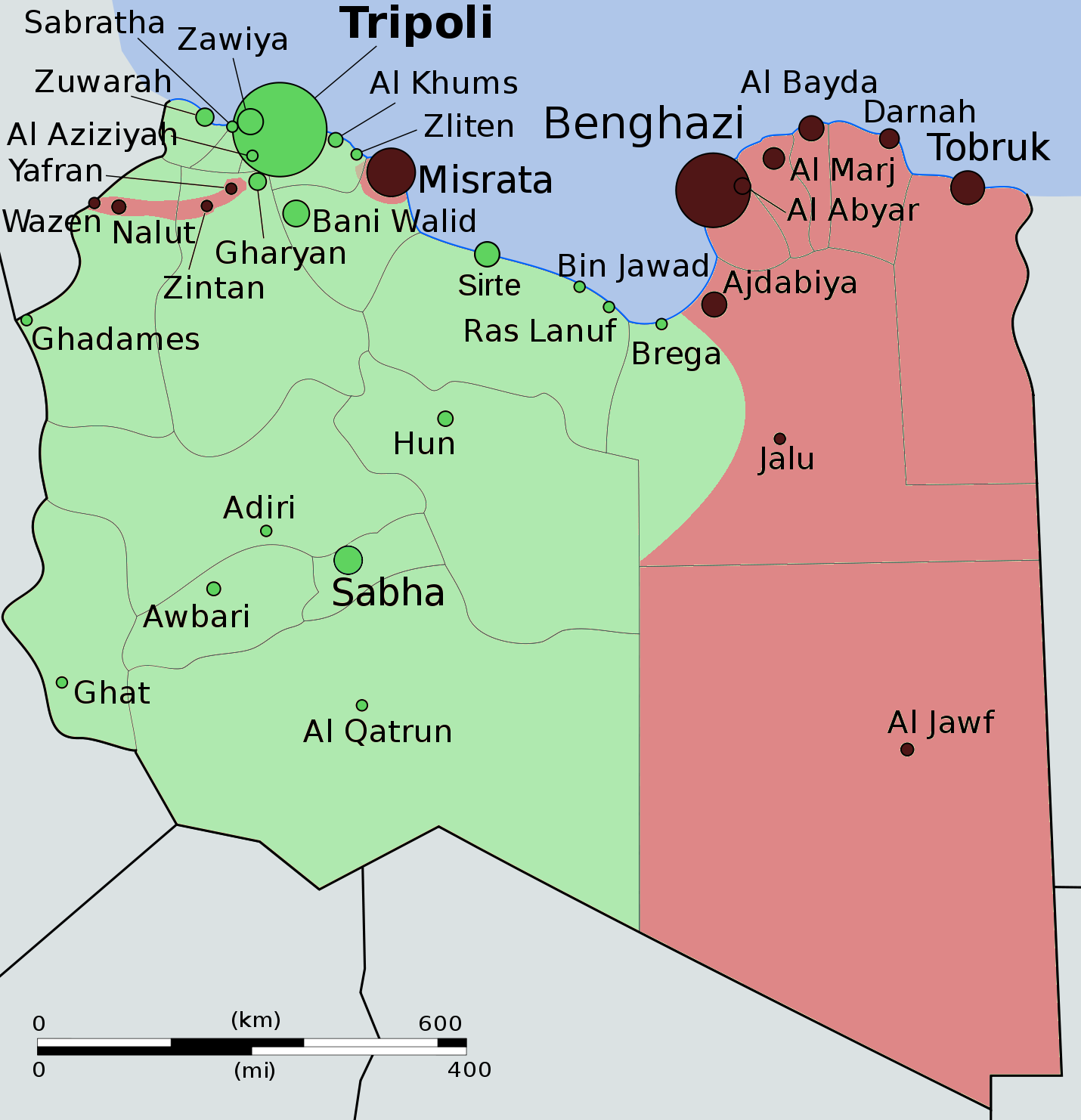 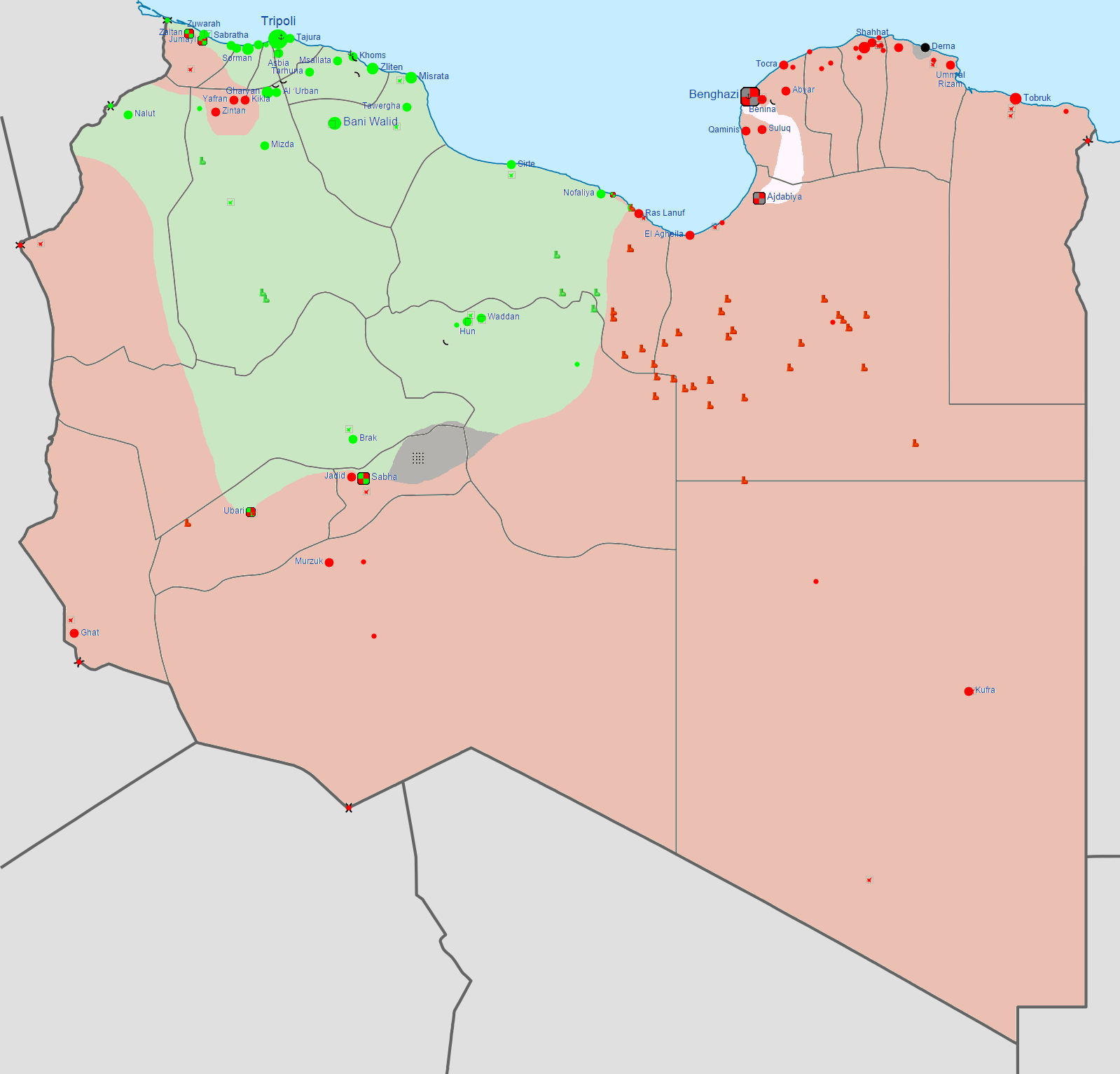 The biggest exception to the consistency here is Misrata, which was anti-Qaddafi and pro-New GNC now. Don't worry too much about the towns to the south--they're sparsely populated and their militias aren't large enough to control their own fate. Benghazi is an important note, too: it is split between Islamist forces somewhat-allied with the New GNC and the forces allied with the House of Representatives.

So, the big question: why do the battle lines end up so similarly?

Let's note first that various tribes, Islamists, and other groups all formed militias during the 2011 civil war--rather than necessarily joining up with one army or the other, the way we're accustomed to in reading US or other civil war history. These militias continued to run around and cause major problems in 2011-2014 and the government was unable to put them down.

But back to the question: why the similar lineup?

One thing we note is that it's not clearly ethnosectarian the way it has been in Iraq. Almost everyone is Sunni Muslim, and we can see that the battle lines cut right through the Arab population (but that the non-Arab ethnic groups have generally been part of the "red" side of both wars): 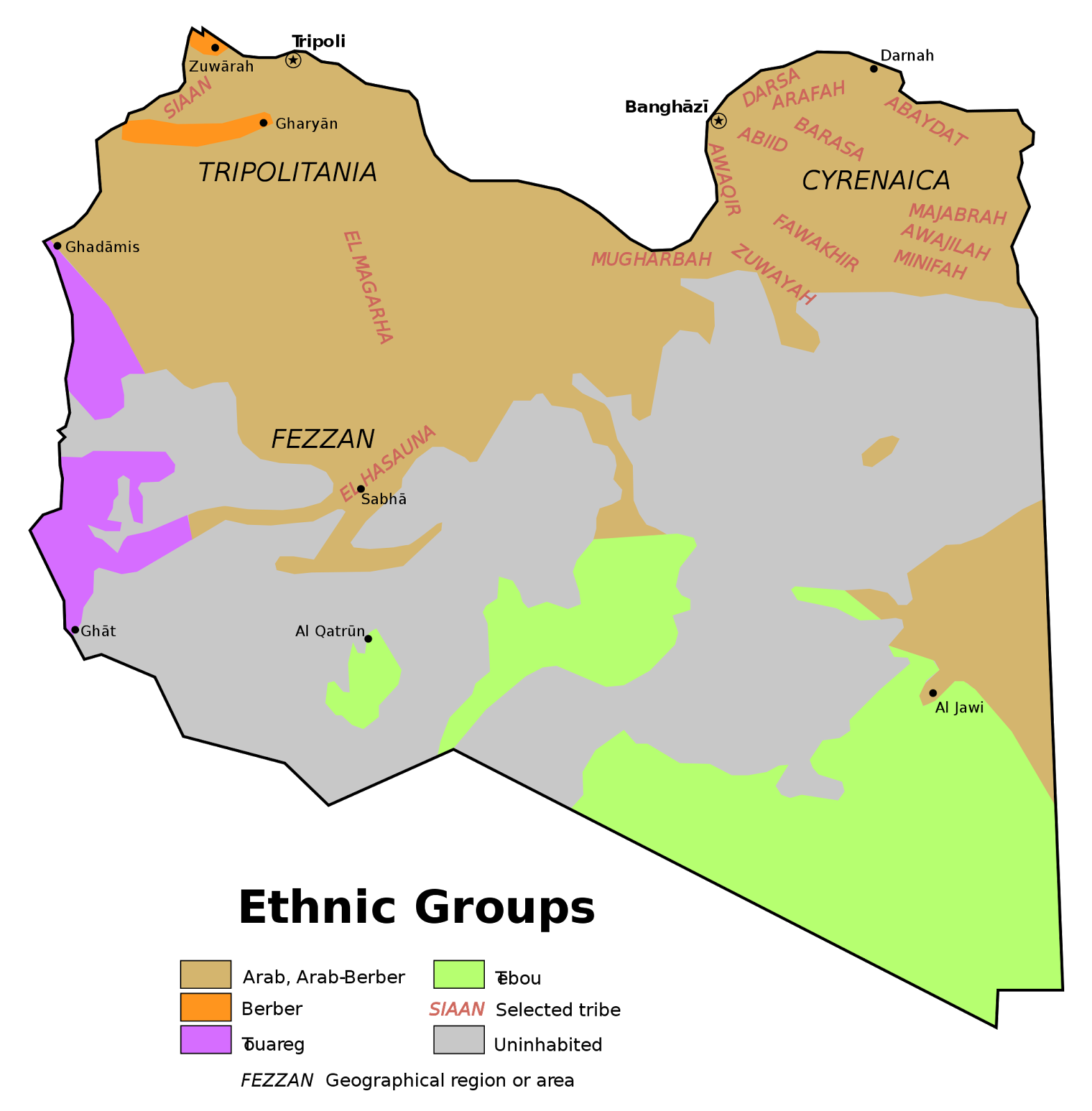 Some of the answer lies in Qaddafi's stance on Islam: he had Sharia law governing Libya (mostly). More "moderate" Islamists were prone to support him, even though he rooted out extremists--not for moral reasons, but because their views of pan-Islamic empire undermined his regime. These rooted-out radical Islamists were part of the opposition and--like at the beginning of the Syrian civil war--were begrudgingly welcomed by the secular opposition.

These more "moderate Islamists" became frustrated at the new government's very Western-style approach to government: secular and liberal. Their militias stuck around as an ideological opposition and wanted the return of Sharia. These "moderate Islamists" now found themselves much more aligned with radical Islamists, and dug in their heels when their 2013 re-enaction of Sharia law came under threat by the looming backlash in the polls.

It's also the case that pro-Qaddafi forces, like Baath forces from Iraq, felt marginalized in the new regime, so they kept their militias and allied with the Islamists in 2014 in seeking the new regime's overthrow.

That's why, I think, you see the anti-Tobruk forces concentrated in the same pocket as in the 2011 war, and also why you see some exceptions: the group that shifted from anti-Qaddafi to pro-GNC has been the coalition of most hardline extremists (including the now-influential Libya Dawn). Under Qaddafi they were hunted and oppressed, and under the new regime they suffered the same. But the allied Islamist/New GNC group shows promise for being closer to what the Islamists want for Libya, so they have joined up. Since these extreme Islamists have significant presence in both Misrata and Benghazi, those cities are the ones that don't clearly line up in the way they did in 2011.

Sadly, Libya follows a long line of examples where Middle Eastern dictators and strongmen fell, and broken states emerged in their wake.
Posted by Unknown at 3:26 PM