China Continues a Stance of "Reassurance" 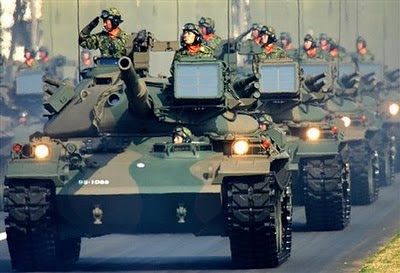 In my undergraduate years, I had the pleasure of working for Prof. Taylor Fravel, MIT's local Chinese foreign policy buff. I did research for a text called "Securing China," whose primary thesis was that Chinese military development pursues a single goal: securing its resource and population base by staunchly defining and defending the borders it identified in 1949 (when the Communist Party took over).

Prof. Fravel is part of a rather non-alarmist school of thought, contradicting the tone of much of modern US news media. The non-alarmist school believes that China's at-times rough-edged stance is primarily to ward off other powers (Russia, the US, etc) from encroaching on what it has asserted to be its territory (specifically, Tibet and Taiwan). Chinese behavior in the Korean peninsula is a different matter, and complicated (and can be discussed at another time).

But to be fair, while China is at times prickly, its primary communication policy on its military is one of reassurance. China has made sure to define very carefully what its arms are for (often these arms are for a hypothetical invasion of Taiwan); it has avoided building unnecessarily provocative (or otherwise globally-relevant) weapons, like aircraft carriers (this is accentuated by a Russian aircraft carrier, purchased in the early 1990s, that currently sits as a theme park). In particular, China has recently emphasized that its military is currently "decades" behind that of the US in technology and capability.

In this case, Beijing happens to be absolutely correct. Chinese troops still lack the train 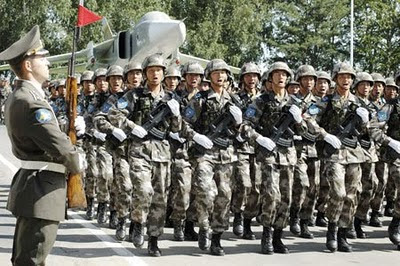 ing and tactical intelligence technology (nor its integration) that US troops have. More importantly (as the US and China would almost certainly never meet on the ground), Chinese naval vessels and air superiority fighters are, indeed, sufficiently behind in technology that a major confrontation with the US (assuming it brought two of its twelve aircraft carrier battle groups to bear) would be swift and decisive.

In particular, Beijing is emphasizing these differences in order to release some pressure from the US about the development of anti-capital ship missiles. Sophisticated anti-capital ship missiles are currently a weak spot in US (and any) naval power. Against powers like Russia and China bearing such weapons, US ships would be sufficiently exposed that they would take significant damage and losses in a pitched naval confrontation.

Secretary of Defense Gates was in China last week in order to try to push China on construction of these missiles--China did not budge. China also failed to make the progress it wanted--the US is continuing its arms sales to Taiwan. It will continue to make such sales as long as China does not offer a sufficiently enticing chip in return (and weapons development is something that one can only tenuously and temporarily offer to delay).

China will continue its stance of "reassurance" as it grows, such that it is not faced with a serious, concerted challenge until it is sufficiently modernized that it can handle it. That said, odds are low that it will become a "revisionist" or expansionist power (unlike Russia) in the near future, even if it does "catch up" with the US--there is no evidence in particular from Beijing that it wants anything different than it did in 1949--a consolidated territorial China.
Posted by Unknown at 6:07 AM No comments:

My Skepticism and Optimism Over Reports of Progress in Afghanistan

One of the tough parts about an anti-insurgency campaign is that it's a pretty tough operation to measure with hard data. That drives people like myself quite crazy, at times. We depend largely on reports from mid- and high-level commanders, who have a bias to over-report success and under-report failure. But we do what we can.

There are a few reasons to be optimistic from some recent news. The first is that an (apparently) relatively large and relatively influential Pashtun tribe in Helmand, the Alikozai, have agreed to deny support to the Taliban in exchange for international aid and development.

It might be a key advance in an attempt to break a vicious cycle in the area, in which the local population doesn't support the Afghan government due to lack of services & security, and the lack of support from the local population bars the Afghan government from taking a foothold. The long-term strategy is to wash the Taliban out of stronghold areas (like Sangin), build government services and security, and thus not allow the Taliban to effectively move back in.

I'm mostly cautiously optimistic, though it'll depend entirely on whether the US is able to capitalize on this (and get more local allies), about which I'm rather skeptical. The US' only serious hope is in the brutality and unpalatability of the Taliban alternative.

I'm more skeptical about fact-lacking reports from senior US military leaders about the success of the North Waziristan campaign. A recent press release about "many, many" fighters/leaders killed or sent into hiding due to drone attacks brings only raised eyebrows. How many dead; what have the effects been? Where do we see relief of attacks? How are we entrenching the gains? None of it's there, and the risk is that, if out leadership is using these reports as signs of success, then we'll fall into the same traps as we did in Vietnam: mis-use our resources, mis-count victories, and ultimately lose.
Posted by Unknown at 7:51 PM No comments: