The Struggle Between Two Bad Options in Afghanistan 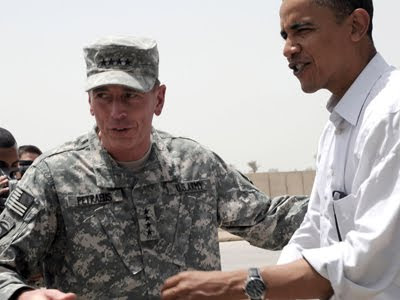 The Tension of Two Bad Options in Afghanistan

The War in Afghanistan remains in a frustratingly ambiguout state; the US is neither decisively winning, nor losing.

Colin Powell says that he is "not sure" whether the US is winning or not. General Petraeus is fighting a number of "soft" offensives, attempting to take-and-hold Taliban-dominated regions and build an Afghani security presence, rather than attack and decisively defeat the Taliban (which may not even be necessary, if they maintain a large political base).

Of course, success depends in part on Pakistan's ability (and willingness) to contain the Taliban on its side of the border. Islamabad's inability to recover from the floods in the Northwest not only strengthen the Taliban's presence there, but have brought murmuring rumors of a military coup.

Afghanistan remains in a bad, but ambiguous state.

This is one of the more politically difficult situations a leader can be in--the President can be blamed either way given a decision. If the US "doubles down" and commits heavily to Afghanistan, it might become a classic "quagmire," and will smear him (and would be a more costly defeat).

Unfortunately, politics are getting in the way of what might be the right decision (This being Bob Woodward's "Obama's Wars").

Obama's military aides have been pushing for a larger, longer commitment--one of the risks identified is that if the US nails down a withdrawal deadline while the Taliban are strong, then there's no incentive for the Taliban to deal--only to sit back and avoid major conflict until the US departs (along, surely, with the rest of ISAF).

Obama's tenuous political position has brought out some (if accurate) potentially damning quotes about his motivations behind his strategy, including:
"I have two years with the public on this," and
"I can't lose the whole Democratic Party."

Domestic motivations in a war effort are nothing new--indeed, they're often the primary motivator in many war decisions (unfortunately), including staying in Vietnam (where there was no real threat to the United States' national security). Interestingly, it may be domestic politics that will drag the US out of Afghanistan.

The infighting amongst Obama's aides and the power of domestic politics in war strategy will be a boon to the Taliban. This is a classic case of the "war burnout" from which many Democracies suffer.
Posted by Unknown at 7:23 PM 1 comment:

Israeli/Palestinian Talks--Maybe Not Quite Derailed

Well, my faint sliver of hope has grown a teensy bit in size with Barak's recent comments.

He's claimed (though Netanyahu hasn't yet backed up) that Palestinian-dominated parts of Jerusalem would be part of the Palestinian state, and further, that the holy sites would be governed by a special body, rather than either country.

While there will be a great deal of opposition in both countries, the balanced perspective that Barak brings to the bargaining table suggests a genuine desire for a solution, rather than simple political posturing.

That said, the vast Israeli settlements in the West Bank will be even harder to withdraw than those in Gaza. Geopolitically, a 2-state solution is far-fetched. But, as they say, "Only Nixon could open China." Netanyahu might just be the man for the job.

But don't get too excited yet.
Posted by Unknown at 5:14 PM No comments: