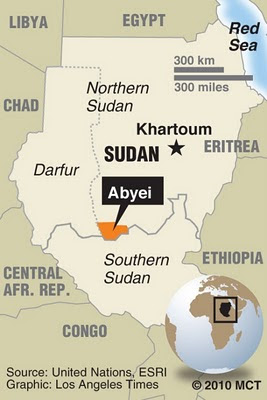 (Background: the vote was part of a peace deal ending a 30-year civil war between the predominantly black traditionalist/spiritualist south and predominantly Arab Muslim north.)

In short, there are a number of models out there that exist in a continuous spectrum between "unity state" and "two separate unity states." There are a number of "federal" style unions, including the US, Germany, Russia, UAE, Bosnia, etc, that have varying levels of legal autonomy at the state level, and (at least) unified defense and representation at the central level. The EU represents a union of a number of states, but with free transit/trade across borders, and some collectivization of resources, defense, etc. Other options exist, too. In fact, Sudan already had a semi-federal state where the South was given some legal autonomy.

Ultimately, I left Conflict Dynamics before we finished the work, but the report that came out aimed to help the UN, AU, and North/South Sudanese governments create options besides total unity and total independence. If implemented, the risk was (of course) confusion as to the details of an arrangement, which could make the referendum a disaster.

In the end, the report (and those of us that worked on it) were unable to gar 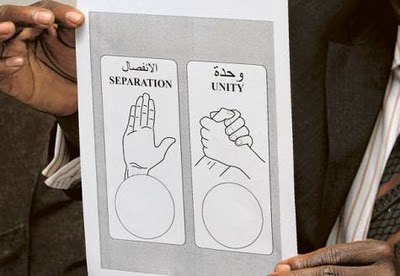 ner political support for a more complex, nuanced relationship between North and South Sudan, and the referendum is coming, with two options: Unity and Independence (see photo). And last I checked, the measure had over 90% support amongst Southern Sudanese, who see it as an obviously better alternative than growing closer to Khartoum. Let's assume the referendum will pass.

The result is likely to be disastrous. Southern Sudan has most of Sudan's oil. Currently, a wealth-sharing mechanism is in place, but there's no plan in place for wealth-sharing after independence. Khartoum will lose a great deal of money... and Southern Sudan will be land-locked, and will likely have to pipe its oil through Northern Sudan, anyway. Piping costs will be a massive point of contention.

Three regions between Northern and Southern Sudan are in conflict (as to which side they belong). Only one is going to have a referendum on its choice for sides in 2011--the other two have no solid plans as of yet.

And, generally, there remain many displaced people (from the war) on eithe 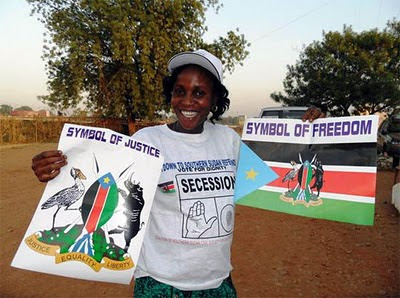 r side of the border, and where they fall out in the census is questionable.

But ultimately, oil is going to be the big sticking point, and there's likely not a great solution for it that can be built after the referendum. I could be wrong, but the two sides are sufficiently uninterested in productive discussion, and the groups leading the mediation are sufficiently ineffective, that war may be coming. Again. Even if the disputed territories (disputed largely due to being chock-full of oil) are resolved "democratically," neither side is interested in accepting defeat and establishing a status quo out of their favor.

And, in the end, the great powers have very little interest in doing more than making enough noise to look like they're not ignoring the situation. Strategically, war would lead to a number of interesting alliances. Darfur and Southern Sudan would almost certainly combine their efforts (if the JEM is interested in independence, as well), and may even see more support from Chad and Eritria if victory looks possible. Al-Bashir, though, will shore up military support he needs before engaging in war, and may well gain support from Egypt and China, both of whom have a strong strategic interest in political stability and central power in oil-rich Sudan.

It'll be a situation worth keeping an eye on, and one that might begin chewing through one of the few tentative areas of peace in east Africa.
Posted by Unknown at 11:05 PM No comments:

Conventional War Dominance and the Railgun 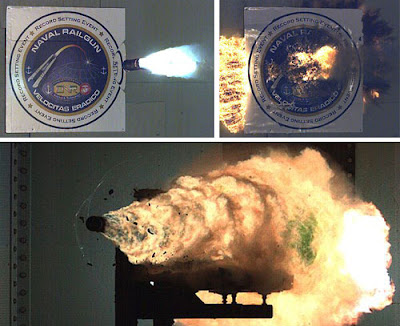 We're taking a break from the bleak world of WikiLeaks, Afghanistan, the Korean Peninsula crisis to focus on the longer-term picture of the world's superpowers. Here's why:

1) WikiLeaks will actually blow over. Sorry, Assange: one man can't bring down the Westphalian model of international relations.

2) Afghanistan will end. Whether it goes like Iraq (with a quiet, humble, half-victory) or like Vietnam (with a humiliating defeat), it won't have a long-term impact on the behavior (or, frankly, the security--terrorist attacks just aren't a serious threat to the stability of the United States, even if people die) of the major world powers.

3) The Korean Peninsula crisis won't become a war. No country in the mix (Russia, China, North Korea, South Korea, the US, or Japan) can actually gain from the measure, and North Korea knows it won't have Chinese support, and would thus get rolled over quickly. As unpredictable as North Korea is, it's not suicidal.

Anyway, now that you're not worried about any of that anymore, I want to think about the future--the control of the world as we know it, who will hold the reins, and how.

So we'll start out small: let's talk Railguns. My first caveat is that railguns will be horrifyingly expensive for a while, at least until one finds a way to fire a railgun projectile without destroying the rail itself (keep up the good work, engineers!). Some pretty awesome technological/business developments have been afoot (I won't repeat these narratives here).

(longer, more exciting technical recap by Anton here): Railguns use magnets to launch projectiles at hypervelocity (Mach 7.5 or so). The projectiles have no explosives; the kinetic impact does the damage. Direct fire will lead to a near-instant kill; indirect fire allows travel of a few hundred miles in a few short minutes (the delay being due to the projectile lifting to about 500,000 ft to avoid air drag).

Expensive as they are, they're going to change the future of warfare, in a few ways that we should think about:

1) Even when we start killing each other in space, control of the oceans will remain the ultimate factor in geopolitical strength. When one controls the oceans, one controls international trade and transport. The US currently effectively controls international waters approximately everywhere (rare exceptions include areas near China), and will continue to do so. Russia and China are its biggest competitors for regional waters in the Pacific, but they are not positioned to control the Atlantic, and will end up competing against each other for control over the Pacific (where the US will continue to keep key alliances in South Korea, Japan, and the Philippines that allow it to project significant power in the area).

2) The United States will be "in the lead" in this technology, by a significant margin. Russia and China are not yet (at least to my knowledge) doing any serious work here. Russia has the pesky "Moskito," a powerful anti-ship weapon, but it fires at slower speeds and has a shorter range than a railgun (making it easier to potentially knock out of the sky).

3) Railguns are ultimately offensive weapons. Many weapons on modern US vessels are "defensive," in that they can be launched second and still be effective (modern jet fighter, AEGIS systems, etc). The railgun would win a naval battle with a coordinated first-strike; firing first means the engagement is over early, and firing second would probably just mean mutual destruction. The incentive with a railgun is to fire it first, rather than wait--thus the "offensive" descriptor.

The result of all this is that the world will likely remain relatively US-centric for some time, as it continues to control the seas. But it also means that there will be a new, natural instability in great power confrontations. For indeed, if the first shooter should win (or, at least, if the second shooter should suffer massive losses), then trigger fingers tend to get itchier.

The best example of this is World War I. Europe thought it has offensive technology (it didn't, but that's another story), and thus rushed to mobilize and press forward during a crisis that could have otherwise been spun down. In contrast, in World War II, Europe thought it had defensive technology (except the Germans, who realized otherwise), and thus cautiously appeased Germany while building the Maginot line.

When everybody believes they have offensive technology (they will), they're more prone to attack if they think they can win.

To be fair, China and Russia are unlikely to believe they can win against the US any time soon--the US has naval power projected everywhere and still has the military-industrial capability to start pumping out war machines at a moment's notice. The lesson of Pearl Harbor has been forgotten by no-one.

So what does it mean? If Russia and China see the world accurately, they will actually be less likely to want to confront the US on the seas, as any military confrontations with them will be likely to be even shorter and more decisive than before.

Russia will continue to focus internally and in its regional periphery for some time, trying to rebuild the military-industrial infrastructure necessary to challenge the European continent (where the US has much less military advantage). China, for its sake, will likely focus on regional power and influence, ensuring strong trade relations and security at its borders. Frankly, as much as there's a great deal of Sino-phobia out there, China has so many demographic problems building up that it will be focusing on its interior for decades as it attempts to avoid a socio-economic collapse. World Domination is not in Beijing's plans (though it may be in Moscow's).

So in the long-term, the US will remain the one power that exerts influence anywhere and everywhere, as long as it wants to. It will be able to bring powerful, high-speed offensive technology to bear in a short period, and be unchallenged in open waters. It will continue to struggle on land. It will worry about a Russian "takeover" of Europe (and eventually a German one) or a Turkish "takeover" of the Middle East, rather than Russian or Chinese challenges at sea.

There's more to this prediction than the railgun, but the railgun is the piece of technology that will push the Russians and Chinese to delay any plans to expand beyond their land influence for some time.
Posted by Unknown at 8:04 AM No comments: