A Brief on ISIS Advance in Iraq

It was pretty pathetic. ISIS took control of Mosul and Tikrit (which are pretty bloody far apart!) in 2 days with 3,000 troops. Iraq had a division of 30,000 that totally dissolved under the advance.

That's just terrifying.
They've got tanks now, too.
And a fat, fat stack of money ($430MM USD, looted from Mosul).

Now they've got control of... well, a whole lot. They have way more in Iraq than they even do in Syria, and the Syrian government has been busy fighting with rebels for over 2 years now. 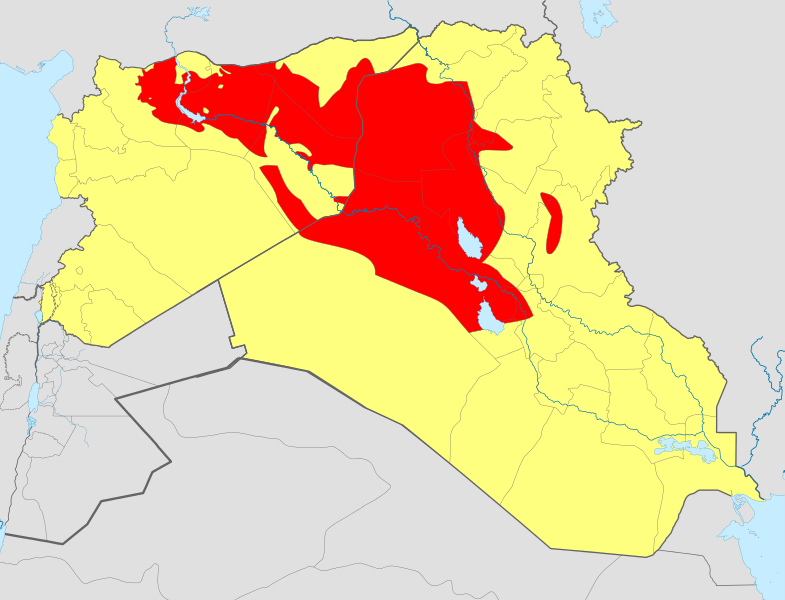 Just look at how close they are to Baghdad.

There's a weird silver lining, in that their end game is a difficult one, so it may not be an existential threat. ISIS just can't take over the whole country--there are too many Kurdish and Shiite militias that would rip them apart.

So all they can really try to do is create a de-facto (and then maybe formal?) separate state in Sunni areas. This could go something like the Kurdish region, with similar headaches for neighboring countries. It wouldn't happen without a long stalemate.

So I don't think these 10,000 ISIS fighters are going to topple the Iraqi government. The Iraqis are mustering the parts of their army that aren't a humiliating mess, and making a counter-offensive (they took back Tikrit, for example). They're getting help (Iran helped with Tikrit and may help with more), and the US may help, although probably not until the most immediate crisis (Obama is putting political-reform strings on any help). They're going after Samarra next.

(By the way, I can only say "this might not be an existential threat" as of today. As of yesterday, ISIS had shot through half of Iraq unopposed and had taken over almost everything of note north of Baghdad, and Baghdad's forces were gathering to "make a stand" at an air base north of the city.) 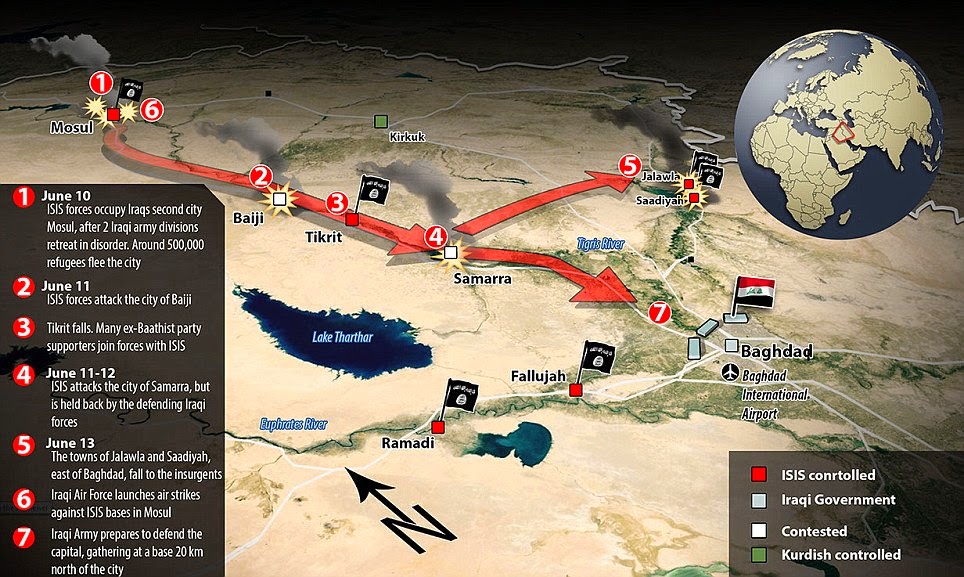 So maybe Iran's help is absolutely critical to Iraq's survival.

Obviously the Iraqi army is going to be in need of a dire, dire shakeup. Lots of people joined the army just because it was a source of steady income. Many have strong sectarian feelings and if they're Sunni, they may not want to fire upon their Sunni brothers (same goes with Shiites). These guys just weren't hellbent on defending the Iraqi Republic. A smaller, more selective, better-trained army may end up making more sense. This will come in time.

There are a few weird silver linings here.

1) If the Iraqis are able to muster the ability and help to do a serious offensive in Anbar, it may cut off some vital shelters and supply/training depots for ISIS in Syria, and limit the likelihood that eastern Syria actually becomes a permanent terror state.

2) Iran and the US might start getting along. They both want so badly to keep a lid on this that we may see joint exercises and a general putting-aside of differences. The fact that Rouhani is willing to do this is a sign that he's a much more reasonable character, too. Iran/US cooperation would actually bring a whole lot of long-term stability to the general area.

We're not at all out of the woods yet. I'll keep you updated.
Posted by Unknown at 8:38 AM 1 comment:

Insurgents from Russia are using occupied border posts to pour through and reinforce eastern Ukrainians. Of course Russia is not really doing anything to prevent this:
http://www.cbsnews.com/news/russian-fighters-killed-along-with-insurgents-in-eastern-ukraine/

Ukrainian troops are battling insurgents for control over dozens of locations, like border posts, government buildings, and a big airport:
http://www.thewire.com/global/2014/05/hours-after-ukrainian-elections-pro-russian-separatists-seize-airport/371579/

The insurgents are well-armed: having taken some armories and (embarrassingly) APCs, they're doing more than your typical AK-47 wielding civilian. They were even able to shoot down a Ukrainian helicopter:
http://www.thewire.com/global/2014/05/ukrainian-helicopter-shot-down-by-rebels-leaving-14-dead/371789/

The military has the advantage in training and equipment, and killed 300 (probably) insurgents as they close in on Slaviansk. That's a crazy-big number for the kind of war this is:
http://time.com/2821792/ukraine-russia-slaviansk/

Putin of course making matters worse by jacking up prices on Ukrainian gas and cutting off supplies from Crimea. Ukraine refuses to pay the extra fee (but is paying at the old rate), generally considering this extortion. Now, of course, Russia is planning to cut off supplies entirely:
http://www.thewire.com/global/2014/05/putin-speech-ukraine-spief-2014/371491/

NATO's response for the moment is to fund/train Ukrainian forces, increase exercises in Russia's regional waters (Black and Baltic seas), and step up spending on its own military (particularly in Poland, which is probably due for a war with Russia within the next 20 years):
http://www.kyivpost.com/content/ukraine/nato-to-support-ukrainian-army-report-350521.html
http://www.nato.int/cps/en/natolive/news_110609.htm
Posted by Unknown at 10:12 AM No comments: