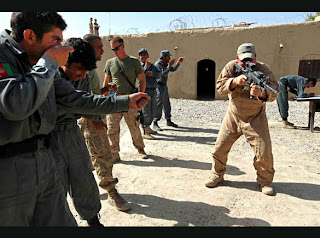 The US leadership in Helmand has, despite frustrations, shrugged and is pressing forward with the Helmand strategy despite a lack of a decisive victory over the Taliban that once controlled the region (and are heckling US forces now).

The primary thrust of this effort involves training local security forces to take over as the US leaves. If the Taliban have indeed largely fled the areas they once controlled, a more trained Afghan force will make it significantly more difficult for the Taliban to simply show up and start running the show again. They will certainly be prey to the Afghan Taliban's advanced insurgent tactics, but the Taliban will certainly not simply be able to walk in, and any overwhelming shows of force by a Taliban offensive will attract enough American attention that it might 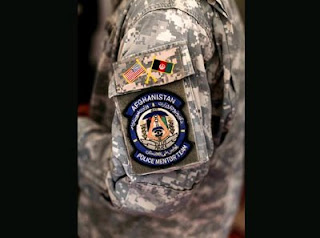 spell disaster. Nonetheless, the US must make sure that the Afghan soldiers trained in this initiative are confident, bold, and hard-nosed, lest they crack to the Taliban's rather infamous tactics (usually involving public listings of targets and private letters to homes threatening torture and death of family members, followed by execution of said threats).

But the US is making further progress that is likely to help its position in Helmand. While Pashtuns of the region generally growl at Western occupation, they have already seen some improvements after less than two months: bazaars and other commerce, as well as schools (especially for girls) have re-opened, and bringing some hope for increased prosperity in a region that's been held back.

If the Taliban return to find a largely unsupportive populous, Afghan and US security forces should have little trouble in driving them back out--they will not be able to become as entrenched and solidified as they once were. Furthermore, as long as US forces stay, their lives may become increasingly easier: as normal fence-sitting Pashtuns see that life might just be better under Kabul's rule, they are less likely to willingly give it all up for return of the harsh Talibani theocracy; and thus, they may be more willing to deliver information to the US.

Therefore, such trust-building measures may lead to the clues the US needs to find hidden Talibani troops in Helmand. Furthermore, intelligence from locals may allow US troops to evade roadside bombs and other improvised insurgent attacks. In particular, massive US presence means the Taliban are unlikely to find out who leaked information--and if they do, the US can protect the informants--which means information leaks are likely to increase (especially in return for monetary incentives the US has set up). Increased intelligence will mean fewer deaths and a longer stay for US troops in Helmand--and the longer they stay, the better the long-term security situation will get, no matter how many Taliban are still around.

Finally, a secure Helmand will mean that the US can start launching offensive operations from the area. Once this is ready, Pakistan should be able to effectively launch attacks into Waziristan (as Taliban will not quite so easily be able to get support from their brethren in Afghanistan, nor so easily retreat there). My personal bet is that the Helmand Taliban managed to get across the border while the US/UK invasion force was spooling up (and world media made a big deal out of the future operation. Why this was not protected intelligence, I will never know). It is possible that with US support, the Pakistani attack into Waziristan may fray the Taliban, and not simply give them the opportunity to retreat to bases across the border. If the US can secure Helmand long enough before it leaves, it should be able to support such an operation--and if my guess about the location of formerly-Helmand Taliban is right, the Waziristan operation should, within some months' time, make the situation in Helmand quite a bit more secure.

This, as usual, sounds rather optimistic. But over-arching US/Pakistani strategy is even less-publicized than US/Iraqi stragegy; and if I can think of it, surely General Petraeus can think of something at least as clever. Despite frustrations in trying to find and destroy the hardcore Taliban, prospects for US operations in Helmand look a fair bit better than they did a week ago, and are likely to improve.

Gates recently announced that the US Army was going to be increased by 22,000 people. Where he is going to find them, I have no idea. Frankly, with the number of army recruiters committing suicide from stress over the past few years, such an endeavor seems quite dangerous.

It seems these troops are necessary to keep up full rotations in Iraq and Afghanistan over the next three years (even though Iraq troops are coming home)--at least according to Gates.

Frankly, morale may be more hurt by the stresses of trying to recruit these troops than not having enough on the battlefield, and the damage to the US recruiting interface overall may be crushing (though most of the damage has likely already be done, to be completely honest).

But I am not entirely sure Gates is wrong--it is possible that 22,000 troops over three years is an entirely reasonable recruitment goal. I haven't heard congress complain, but they apparently have a more urgent meal on their plate before August.
Posted by Unknown at 7:09 PM 1 comment:

The Marines stormed into Helmand with force, speed, fury. Offensives are really the Marines' game, and the ride into Helmand was no different. Had anyone been there to fight them, it would have been quite the horror show.

But. There was nobody there to fight them. The Taliban apparently did the smart thing and disappeared when the Americans showed up, rather than stick around to try to repel them. In fact, the Taliban have fared quite poorly for the past 8 years when they have taken Americans toe-to-toe. But this is asymmetric warfare, and as long as the Taliban shows patience, they have a shot.

I wondered whether the Taliban would be wise enough to disappear, rather than fight, after their disastrous stand at Swat. These Afghan Taliban are more hardened than their Pakistani brethren, though I figured much of that hardness would have trickled south by now. More likely, these Taliban are under wiser command that heard of and learned from the Swat disaster.

After disappearing, the Taliban have picked (apparently quite well) opportunities to attack both the Americans and the British. 8 Brits have died in the past two weeks, and the British will to keep fighting is seriously starting to falter. The Taliban may be concentrating on them specifically to try to kick them out of the fight, eliminating the second-largest troop presence in Afghanistan. But the primary casualties from the last few weeks have been from bombs and traps--not head-to-head fighting. It's terrible for troop morale, and it means little is getting done. The offensive should be offense--otherwise, it's just high exposure.

There is good reason to be anxious over the Helmand offensive--so far, it looks like a failure. Are the bulk of the Taliban hiding in Pakistan? In the mountains? It is apparently somewhat unclear. Unless the US and UK can find them and hit them hard, this offensive is going to be a failure.
Posted by Unknown at 9:28 AM 2 comments:

A Brief on Honduras

You might be wondering what the heck has happened in Honduras that got the international community so excited. Frankly, coups were like Thursday Meatloaf in Latin America through the 1980s, and as much as there was always a bunch of sabre-rattling, they only generated serious attention as far as they upset the geopolitical and ideological balance.

The coup in Honduras is being wildly condemned by leftist governments; Nicaragua and Venezeuala are both going so far as to threaten war (Venezeula would have to deploy boats and planes of excessive quantity to do this, and would almost certainly irk the US beyond what they're capable of); Nicaragua has moved troops to the Honduras border. And President Obama himself has condemned the coup as undemocratic, but has not said much beyond that.

Frankly, the Honduras coup is rather ambiguous. Zelaya's extended-term stunt clearly contradicted the constitution, and the Constitutional Court told him to cut it--he didn't. So what then? Impeachment isn't actually an option in the Honduran constitution, and much like the Marshall Court of the US, the Army improvised and got rid of him. Was he becoming a Chavez-style tyrant? Maybe, but precedent is important. That said, they did use the force of violence to oust him, and imposed their own "interim government." Perhaps talking about it a bit longer might have been polite.

So my personal feelings on the coup are a bit ambivalent. I agree Zeyala needed to go, but the way of taking him out was perhaps not spectacular. But what other options were there? I'd love to hear what you guys think in comments.
Posted by Unknown at 11:22 AM 2 comments:

Thoughts on the Helmand Offensive

It's getting... some news. Not too much.

But it's the biggest military offensive in Afghanistan since the invasion in 2001, and the stakes are high. The outcome is important. The implications will be enormous.

The whole thing smells a bit sweetly of a General Petraeus plot. Large surge of troops, offensive against the seriously bad guys, and long-term boots on the ground to provide security and institutional organization where there is a vacuum. Petraeus trained the US army in doubling as a low-level government, and those skills will be critical in winning the long-term security of the province. Hearts-and-minds.

But if US marines and UK army troops are able to achieve victory (loosely defined as restoring peace and security to the region), then a number of benefits follow:

1) Helmand and Kandahar will be more secure areas in which the US can operate and prevent Taliban from pouring across the border during the Waziristan operation in Pakistan. This is critical. If Helmand and Kandahar remain in Taliban hands, then even a successful assault in Waziristan will be worth little to the long-term war against the Taliban. On the other hand, if the US and UK can hold the area and patrol the border, then they will pinch the largest concentration of Taliban in the entire Afpak region, and have a good shot at delivering the first crushing blow in a very long time. But these Taliban are wiser, tougher, and smarter than their brethren out in Swat, and will not go down so easily.

2) Voting in the area will be secure. Giving the Pashtun majority the ability to vote in full (where currently the only secure voting areas are in northern, non-Pashtun areas) will legitimize the election and potentially prevent post-election violence.

3) The ISAF will strike a significant psychological blow to the Taliban--and bolster the confidence of anti-Taliban citizens in Afghanistan, much like the Pakistani assault in Swat did. The ISAF needs to regain the momentum of this war; the Taliban can out-wait foreigners rather indefinitely if it is not soundly beaten.

Losing, of course, means that the momentum is very squarely in the hands of the Taliban. But, frankly, the US and UK are unlikely to simply give up this fight--they will stick around and make life rather difficult for the Taliban for a long time. Total defeat seems unlikely, and they should at least be able to operate with enough presence to support the Waziristan assault in Pakistan (at which point the US should have an easier time "mopping up" Helmand and Kandahar, as the Taliban will have no safe zones). It may be messy and long, but I believe the US is likely to turn a victory here.

But if it doesn't, serious questions will be asked about whether it is worth it to stick around much longer.
Posted by Unknown at 11:29 AM 1 comment: