As much as I'm marginally annoyed with WikiLeaks, they have leaked some relatively interesting information. A few tidbits:

-China is distancing itself from North Korea, and considering supporting a reunification under Seoul's command (calling North Korea's leadership a "spoiled child").
-Saudi Arabia asked the US to launch air strikes against Iran's nuclear programme.
-Israel conferred with Egypt and Fatah before attacking the Gaza Strip most recently.
-The US doesn't actually think a European missile defense system will bring real security to Eastern Europe.
-The UAE and Bahrain want Patriot batteries to defend against Iranian ballistic missiles.
-Saudi Arabia staunchly opposes the al-Maliki government in Iraq, worrying that it is an Iranian puppet.
-Secretary of State Clinton asked (perhaps pejoratively) whether the president of Argentina was completely mentally sound.
-Yemen asked the US to bomb Yemeni insurgents--and offered to tell the public that the strikes were carried out by the Yemeni military.

WikiLeaks, famous/infamous for its releases of classified documents pertaining to the Iraq and Afghanistan wars, is under attack.

WikiLeaks is about to release its largest set of documents pertaining to the US, and this release may be its most scathing yet. The release is likely to cover cables/documents related to nearly every country in the world, and some are likely to be embarrassing. Secretary of State Clinton has already begun a blitz of apologies and preparations for the release.

The DDoS attack may be an attempt by one of any number of US agencies (CIA, NSA, DoS, etc), or any other pro-American group. Certainly, WikiLeaks has made a number of enemies in the past few years, and has even lost the immunity it used to enjoy in a few countries in Europe.

In the end, such a DDoS is far too late. WikiLeaks is an intelligent organization, and has many outlets by which it can share its (backed up many times over) data, including the New York Times and the Guardian.

Thus, I'm not entirely sure what the DDoS is driven by, except as a lash-out or retaliation. WikiLeaks' paranoia means it will require a much more sophisticated attack to have any hope of taking it down.
Posted by Unknown at 9:21 AM No comments:

The American Response to the Korean Provocation

Potential Reasons for Attack
1) Kim is trying to re-set the "red line." In order to make sure it can secure a working nuclear weapons and deployment system, Kim Jong-Il might be trying to re-set what behavior actually leads to war (such that the nuclear program won't).

2) Kim Jong-Un is trying to display his power. Kim's successor may be trying to show domestic and international players that he is strong-armed and sufficiently aggressive that nobody thinks the shift in power will lead to a period of "softness" which could be taken advantage of.

3) An anti-Kim faction within the North Korean military may be trying to weaken the regime. After Kim Jong-Il came to power, a purge of military leadership struck fear into Kim's enemies, but also bolstered their sense of cohesion. Worries of another purge--or simply a sense of opportunism with the change of leadership--may be leading such a faction to provoke South Korea and the West into taking moves to weaken the Kim regime, up to war. Such a weakness or chaos might present an opportunity to stage a coup and replace the leadership.


Potential Responses by South Korean and Allies
1) The current response: the US joins South Korea's military exercises. The artillery shelling came during annual South Korean inter-service exercises in the Yellow Sea (which may tell us something about its motivations in North Korea). South Korea's response is measured, but the US has sent a carrier battle group to join the exercises. This serves both as a reaffirming of its commitment to South Korea's security, and also leaves open the option of precision air strikes against North Korea in the near future. Ths risk is that this response may look weak.

2) A tit-for-tat response. South Korea might attempt to show that it won't tolerate unprovoked attacks by reacting similarly: hitting a North Korean base. The risk is that North Korea may choose to escalate to show that it's willing to keep pushing to make sure it has the upper hand.

3) Tough sanctions. The US could rally a coalition for more sanctions against North Korea, but it's running out of options. Already, most countries avoid trading to North Korea in luxury goods (particularly those of which Kim Jong-Il is quite fond, like Mercedes cars). Broad sanctions would hurt an already-starving population, and would likely bolster North Korea's support for the regime, thus presenting a positive feedback to the North Korean military.

4) Significant escalation. South Korea could launch heavy surprise strikes against North Korea, both damaging its ability to wage war, and delivering an unambiguous message that further provocations would lead to destruction of the North Korean military (as South Korea would not make this move without US and Japanese support). The risk here is that North Korea would respond with artillery strikes against Seoul, where 25% of the South's population lives. Currently, North Korean artillery is so numerous and well-bunkered that it would be nigh-impossible to eliminate it before serious civilian tolls were suffered in Seoul.


The Chinese Response
The Chinese response has been intentionally cautious. North Korea as a tenuous ally has proven a liability, but China is largely unable to stop supporting the regime. If the regime collapses partially or entirely, China would be left with a humanitarian disaster and a refugee flood at its border (and under the Geneva conventions, it would be required to give them "reasonable" accommodation). China's current approach to North Korea is to make sure that the regime in power--whatever it may be--is stable. Unfortunately for China, this means supporting a temperamental and unpredictable Kim. At the same time, China will try to keep Kim in line as much as possible.

But Kim knows China is unable to stop its support, so China cannot use it as a serious threat (much like Israel knows the US is unwilling to drop its support entirely, and therefore the US cannot use it as a bargaining chip). China will need to find a way to temper North Korea's behaviour if it is going to be able to keep South Korea as a friend and trading partner (lest it lose South Korea to US/Japanese influence entirely).

Wisdom in the US Response
The US response shows strength and initiative to not only North Korea and China, but to the entire world. This is particularly important in a time when countries like Iran and Russia might see the US as exhausted or resource-drained from its commitments in Iraq and Afghanistan. The movement of its carrier battle group reminds potential rivals that its sea and air forces--the primary implements it would bring to bear in any engagement that wasn't a full-scale invasion--are still free, well-funded, and willing to move.

It also shores up South Korea's confidence in the US, which has balked at supporting countries like Georgia, Poland, and the Czech Republic against growing Russian influence and assertiveness. The move has marginally damaged relations with China, but the United States is showing South Korea that such damage is worth it in order to stick to its obligations.
Posted by Unknown at 3:17 PM 2 comments:

A Petraeus-Style Plan Emerges in Afghanistan

It's being called "Inteqal," which is both Pashtu and Dari for "Transition." It's the NATO / Kabul plan (masterminded by General Petraeus) for a phased transition of military control, by province, to the Afghan military and police force. 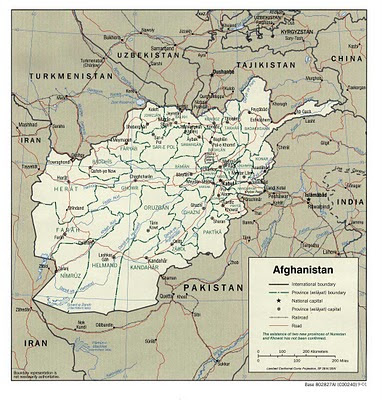 The fact that there's a plan doesn't necessarily mean that it will work. Even if it's a good plan, it needs excellent execution to achieve "victory" (where "victory" is a very difficult and vague definition, anyway). But, holy smokes, it's a plan, which is something the Afghan War has seriously lacked for the last 8 years.

This kind of plan has two advantages: first, it gives the Afghan Army and Police (as well as civil administrative) forces "practice" in these early-transition provinces, such that the kinks can be worked out in a lower-risk environment. Second, it gives NATO forces an opportunity to progressively consolidate, which allows them to maintain security forces in more hotly contested provinces, even as the troop draw-down begins. the plan has some merit.

Unfortunately for the sake of my curiosity, Petraeus is not keen on publishing the transition plan right now, lest it arm the Taliban with a document around which to develop a detailed strategy. But we can know a few of the provinces coming soon (like Herat), as well as some of those definitely not being transitioned for a while (like Helmand and Khandahar).

Small outposts and bases have already been transitioned--in part as a trial for the strategy, and in part due to the need to show progress.

The plan is good--though progress may need to be measured with some skepticism. The fact that a province is "transitioned" does not necessarily mean it's secure. With a pullout schedule looming over US forces, Petraeus will be under the gun to move quickly with the transition. The risk, of course, is that the "early" provinces are transitioned quickly in order to maximize security presence in Khandahar, Helmand, and Zabol.

Furthermore, NATO has to define the end-game. The Taliban are not going to disappear before NATO leaves. There is much talk of negotiations, but it's not clear whether those are actually happening.

In the end, this plan needs to be able to pose the following threat: "The Taliban cannot reach a sweeping victory after NATO leaves. A continued civil war will be a bloody stalemate." If such a threat is credible, negotiations can begin in earnest. Therefore, while Petraeus cannot divulge the details of the transition plan, results and progress will need to be publicized impressively, to put the Taliban in a position where it makes sense to seriously consider collaboration.
Posted by Unknown at 6:05 PM No comments: