A Big, Fat, Hairy Update on Syria and Iraq

Lots has happened since we last updated you about ISIS, Iraq, and the Syrian civil war. We're going to make an effort here to cover all the key changes on the ground, discuss how they happened, pat ourselves on the back about being right, and then tell you what we think is going to happen next.

Enjoy. Thanks as always to the tireless efforts of the Wikipedia editors of the Syria/Iraq map.

So there are 3 big places to look at this fine leap day:


But that's really where we always look, because that's where the hot action is.

Ramadi fell a couple of months ago, and the Iraqi army--in its usual excruciating slowness--has pivoted towards Fallujah. This is a tougher nut to crack. It gave the Americans hell twice during the occupation. But it's also full of people pretty sick and tired of ISIS's crap, so they're less prone to really enthusiastically take up arms against the government. They're also sometimes carrying out attacks on ISIS troops there. Sunni volunteers have come from around Anbar to join Iraqi forces, which will be a plus during the upcoming door-to-door.

It's hard to get out of Fallujah, and conditions are pretty crappy right now, but the Iraqi army has the city totally surrounded and has set up very heavily armed checkpoints for those trying to escape. This also means that ISIS is able to escape, which is a mixed blessing: 600 have slipped out, leaving only 400 behind, but it means those 600 won't be eliminated (and they're probably on their way to Mosul).

The big black dot in the middle there is really just the city center: the army now has the surrounding neighborhoods. One of the reasons it's taking its sweet time there is that coalition warplanes are softening the city with airstrikes, and the army really can't afford another "drop your guns and flee" debacle.

Fallujah is pretty much a ghost town at this point, and scraping through the city center is going to be sucksville, with all the booby traps and sweet sniper positions in the rubble. But it'll get done. 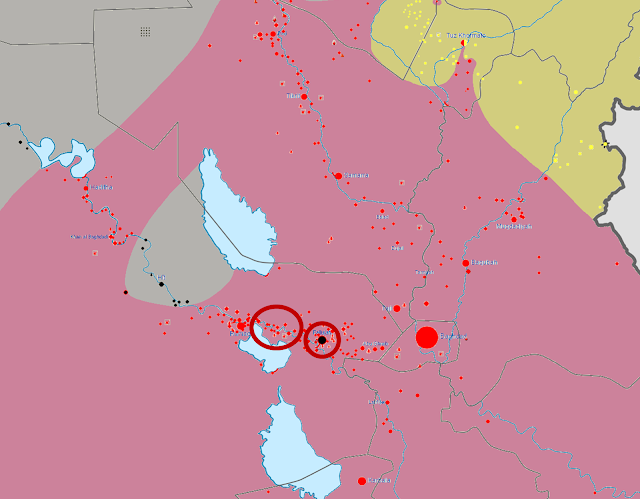 And then, finally--finally--on to Mosul. But don't get too excited.

The Kurds, being the very fierce bros (and don't forget the many very bad sis's, too) and deciding (with much US coordination) to take matters into their own hands where they can, decided it was about time to cut off the Raqqah-Mosul supply line. For those forgetting, Raqqah is the de facto capital of ISIS. Mosul is the largest city they've got.

Some months ago, the besieged Syrian Army almost lost al-Hasakah. The Kurds decided they'd swoop in and take care of it.

But a few weeks ago they also decided to push south and cut off the final highway that's at all plausible to use to resupply Mosul from Syria. So in addition to Sinjar--where the two key highways meet--the Kurds now control the relevant border crossings in the north.

So there's a lot of nope for anyone in ISIS trying to sneak anything across that can't fit under a burka. 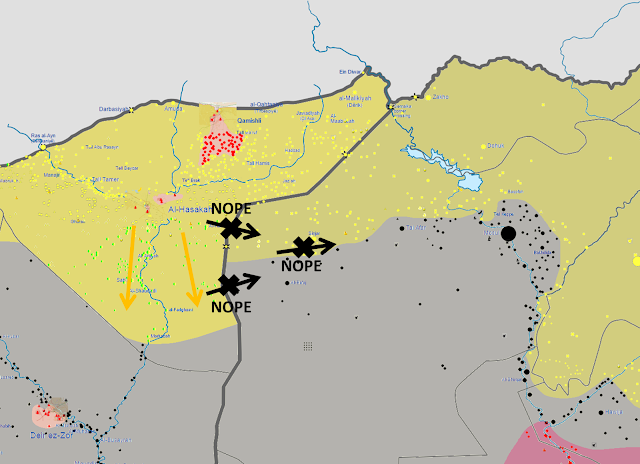 Mosul is far from surrounded, and it's still using ISIS's typical leeching strategy to extract resources from the countryside, but it won't be getting more heavy weapons or serious troops from Syria, which means the coming siege has its flank covered.

Nice work. Did we call it? Totally. The Kurds probably won't march on Raqqah, but they've got enough staying power to make some strategic moves, and holding the northern supply routes is the biggest solid they can do for the war without going all out. Expect them to help in Mosul, as well--there are a lot of Kurds in the city. Or at least there were.

So this is a hot mess.

Russia showed up a few months ago and started bombing the snot out of the city and surrounding countryside with the intent of getting government troops back in charge. At this point, Aleppo makes Fallujah look like Miami beach, but it's strategically and symbolically critical.

Russia's air campaign has reinvigorated the government's northern campaign. And it's killed a lot of people, including lots of civilians. It's dirty, mean work. It spawned another wave of refugees.

But we're holding onto our controversial position here that the Russian intervention is the best chance Syria has to end this war and beat ISIS any time soon. The ongoing rebel-government stalemate is good for two interests: ISIS, and the grim reaper. More on that later.

What we're seeing on the ground is a massive offensive out of the al-Safira area. Southeast of that, by that lake, government troops surrounded and disintegrated an ISIS offensive. They're surrounding Aleppo from the north and south, and have cut off the rebel supply line from Turkey. They're pushing northeast, and recently lifted the siege on a military base that has been holding out against ISIS for over a year. It's moving pretty fast.

ISIS has really committed pretty big to the area. They finally captured the symbolic town of Dabiq (where their weird prophecy says they'll bring about the apocalypse) as the rebels have collapsed. Right on cue, the Kurds--having none of that--have started to push back in. They're butting heads with the government, but have managed to not start killing each other yet.

The Kurds have also finally crossed the river from the east, pushing towards Manbij. It's a little later than I expected, but it's good timing: ISIS committed to the Aleppo front and that left the back door to Manbij open. The Kurds made a quick sprint towards the town but have faced some stiff resistance. At this point they may wait for the government to beat on ISIS a little more before finishing the push.

At this point, the Kurds are hoping to expand their territory to cover more Kurdish population in that area near the border, both to protect them and to stake their claim when the dust settles.

Back to the government: taking Aleppo and isolating rebel forces in the north could lead to the end-game for the war. And that's a good thing. 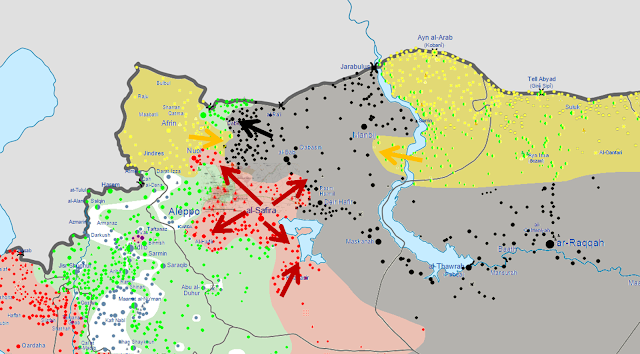 We're feeling pretty vindicated about our support of the Russian intervention: breaking the stalemate and giving one side an advantage (something the US wasn't willing to commit to) is what's going to end the war. And it's working.

The rebels, sensing that things aren't going to go their way, have come to the bargaining table with a willingness to compromise, which might mean elections or a coalition government. So far, Secretary of State Kerry has brokered a truce with Russia: the "moderate" rebels and government troops are supposed to stop fighting each other. The truce went into effect two days ago.

It appears to be holding--mostly. Russia has halted airstrikes on "moderate" rebel positions, and for the most part the guns have quieted around Aleppo. Russia is still hitting al-Nusra Front (the white space on the map), because they're crazy terrorists. It's--once again--a pretty masterful coup by Russia: al-Nusra is currently allied with the moderate rebels, and they're definitely the better fighters. In this truce, Russia has divided and conquered Assad's political enemies, and with the moral high-ground on the deal.

You might be asking: "If Russia/Assad are winning, why the truce?" Remember that the reason to win is to rule over a country. If it gets pounded into the dirt, there won't be much of a country to rule. Ultimately, total destruction of the rebellion would be enormously costly to Assad's troops and to the population and infrastructure. Assad does not want to rule a shell. The point is to convince the rebels they can't win, not to kill literally everyone that disagrees.

And further, there's ISIS to deal with. As we've said before, they won't get dealt with until there's a united front between Assad and the rebels. And without a doubt, nobody's suggesting a truce with ISIS. So if this truce holds, ISIS has 3 enemies with guns--finally--pointed towards only them.

Will the truce hold? Probably-kinda, the way it's kinda holding in Ukraine. If they can get some traction, they'll be able to start really squeezing ISIS back towards the east, and have some serious talks about the political solution while they're organizing a final offensive. Working together against a common enemy will do some good to start putting antiseptic into festering wounds in the country.

Assad's going to scrape together something of a victory out of this. Is that the best thing? Almost certainly. Given the political climate in Syria, I can't imagine a rebel victory turning into anything better than post-invasion Iraq or post-intervention Libya, and lord knows we don't want that.
Posted by Unknown at 11:13 PM No comments: