Why Putin Pulled Out of Syria

Monday, 3/14: Putin announces sudden pullout of Syria, saying he conveyed it to Assad the day before, saying that Russia had "achieved its objectives."

It was a surprise. Given Putin's foreign policy style, as usual, it was unpredictable. As usual, Americans and the West were generally left flat-footed. I was actually pretty surprised that Russia pulled out before Aleppo fell to government forces.

Russia getting out certainly feels like good news. Is it?

Yeah, probably. It's unlikely that this is a dubious trick by Russia: they've got a stalemate with a shaky ceasefire that's... actually holding. The rebels took such a shellacking that they're in no position to launch a sudden counter-offensive (I think). The ceasefire is likely to hold. Humanitarian relief can reach Aleppo, and it's possible some refugees will start being able to return to what's left of home.

But why not just extend Assad's power? Why pull out now? I think there are a few key reasons:

Realistically, the best Russia can hope for is a coalition government with Assad still in power until 18 months down the line. Putin is nothing if not pragmatic in his realpolitik.

Was this a good move for Russia? Well, suddenly talks have picked back up--literally the day after the pullout began. Assad's much more willing to negotiate without Russia covering for them, and that's what Russia really wants: serious peace talks that just end the bloody war already. Other Syrians are more willing to talk now that it's just a 1:1 fight. Both sides have their patrons (the US and Russia) in these talks, both of which will be supporting their side while trying to twist some arms to get real commitment.

The final good sign for Russia--besides the ceasefire holding--is that opposition and government forces have both turned their guns on ISIS, and are making some gains... even without serious support from Russia.

Now that the Syrian army has shifted its focus (finally) to ISIS, it's pushing to entrap the ISIS forces in the northwest. I'm guessing it's pushing to al-Thawrab in order to cut off the 2nd link (the Kurds took care of the first) between Aleppo and ar-Raqqah (the ISIS capital). ISIS committed a lot of troops there... particularly hoping to pick at the warring Syrian factions.

This will be Syria's 2nd-toughest operation against ISIS (before the battle for ar-Raqqah, if it comes), and everyone is really tired. Putin is cleverly leaving the monkey on the back of the US coalition to bear the costs of air support. But encirclement would be a great first step. If everyone's able to coordinate their efforts, ISIS will be get pressed on 3 fronts here. Not sure if that can happen. 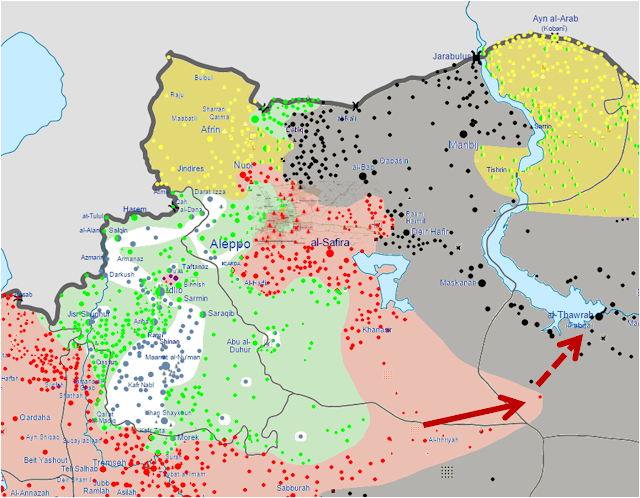 The Syrian army got pushed out of Palmyra and back to the front door of Homs, but is turning the tide. We see them expanding in 3 directions here to take back heavily populated areas and dislodge ISIS into the desert, where it will be much more vulnerable. 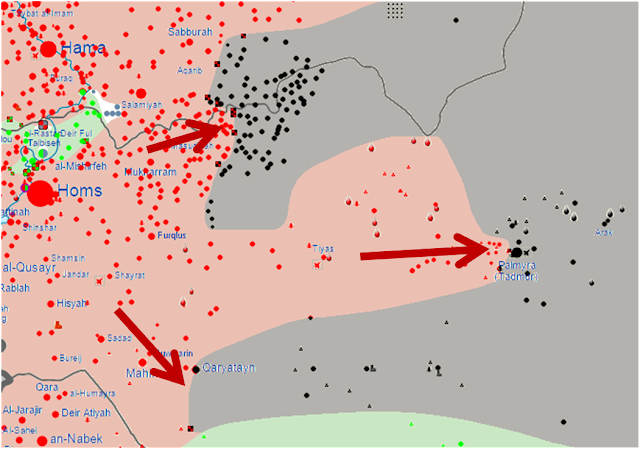 Opposition forces have quickly advanced to the border with Iraq, probably high-fiving Iraqi army forces at the border crossing. They've now got a pocket of ISIS pretty well surrounded and cut off. One of many tough parts about the ceasefire is that there might be a bit of a scramble for territorial control if/as government and opposition troops advance on ISIS positions. It might be tough to not end up shooting at each other. It'll be a big test of the ceasefire. 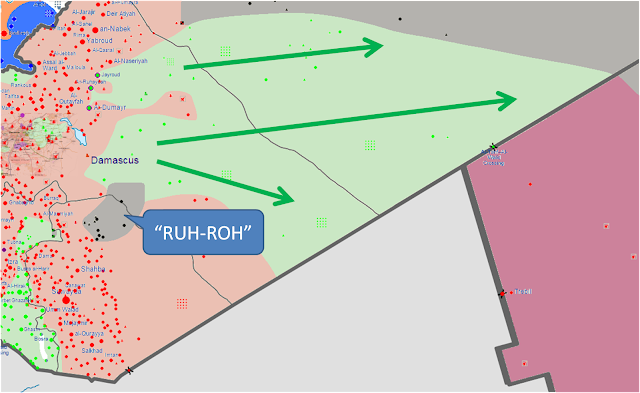 So that's all the news that's fit to print today. Still giving my very controversial thumbs-up to Russia on this one; I think they accelerated the peace-building process pretty significantly.
Posted by Unknown at 1:15 PM No comments: