All these are taken from the DoD.

Picture the first: Overall Weekly Iraq Attacks. Dramatically down, to '04 levels. It looks, though, like attacks against Government Facilities are not down much, whereas small arms and mortar attacks are very down--this indicates to me that anti-government terror attacks (probably Al-Qaeda centered) attacks are more stubborn than sectarian militia fighting; we'll see some of this later. Another interesting thing is that violence is significantly up during Ramadan every year. Understandable: I'm homicidal when I'm too hungry, myself. 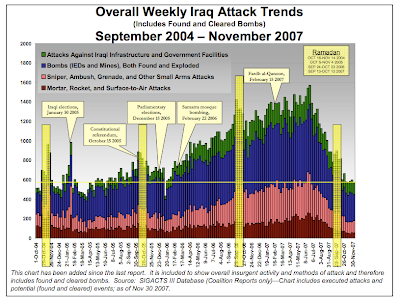 Picture the second: Ethno-sectarian deaths are down some absurd amount like 90% (or so it appears) since a peak in Dec. 2006. One simply cannot call this a civil war any longer; one can never expect ethnic deaths to reach zero, but reducing this number of ~220 by another order of magnitude would probably give the United States a run for its money in ethnic passivity. 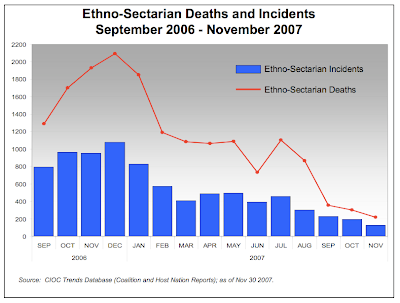 Picture the third: total civilian, Multinational Force (MNF), and Iraqi Security Force (ISF) deaths. By both conservative and bad-scenario estimates, civilian deaths per month have dropped over 67% since their peak. Unfortunately, it's hard to look at this figure and tell how ISF and MNF deaths are doing, but the report shows that monthly averages are down about 50% from their peak. 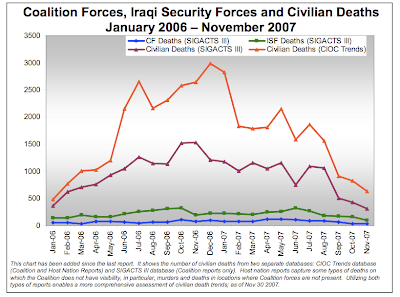 Picture the fourth: Attacks by province. The first surprise I see is Anbar, from the last post on attacks by province I made (Feb 14 - May 4), Anbar has dropped from 25 attacks per day to five. Baghdad is down from 50 attacks per day to 27. Attacks in Ninewa have not budged over the same time, and Ninewa has made it into the "red zone" of four tough provinces that need work; but this is seems to be only because it has failed to improve, not because it has worsened. Other provinces have reduced in daily attacks by a more modest, but appreciable, rate. 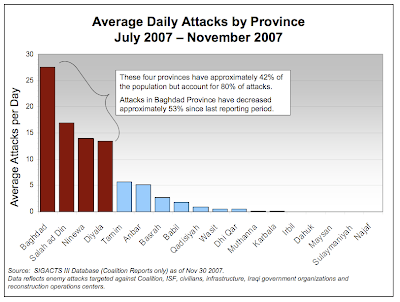 Finally, picture the fifth: The Iraqi Provincial Security Transition Assessment. Self-explanatory by now, I'm sure, but I should note that the British handed over Basrah in December. Based on the previous figure, Qadisiyah and Wasit look like very reasonable choices for quick handover-- afterwards, the Polish zone would be reduced to only Babil. 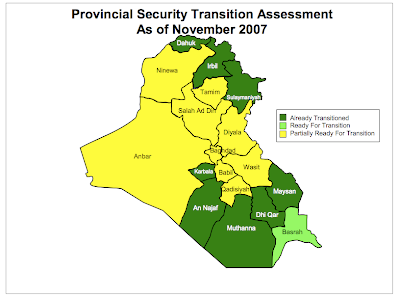 In conclusion, things keep looking good. Here's to the brilliant General Petraeus keeping up the good work. If this trend keeps up, we can hope to see easy times in Iraq in another year.
Posted by Unknown at 11:29 PM

I like your charts. It's always good to see some evidence supporting your wanking instead of idle wanking. Keep up the good work!