China struck a large victory in the Taiwanese presidential election yesterday, with the Guomindang candidate Ma winning with a healthy 58% of the vote. 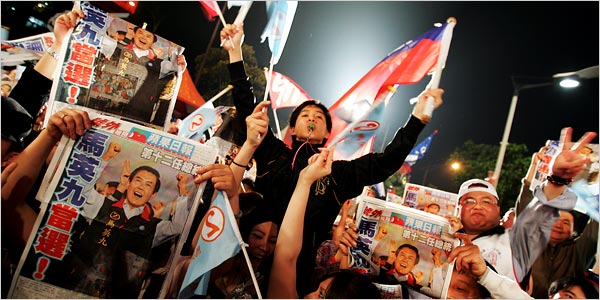 Ma may not be a great fan of China, but he supports increased economic ties, eased travel, and a peace agreement. It may not sound like too much, but the PRC sees it as a great improvement over Chen Shui-Bian's attempts at incremental independence. The Chinese have been patiently courting the GMD, while lambasting the DPP, for years as the DPP held power. Finally, with parliament and executive both secure, the GMD will be able to work on improving ties with China long-term.

But everywhere that the Chinese have gotten the Taiwan situation right, they have gotten it wrong in Tibet.

Protests in and around Tibet continue despite brutal PLA crackdowns that have probably killed hundreds; and China seems to be losing control. The courting method used in Taiwan has not been used in Tibet; the PRC keeps thinking that it can continue to crush Tibet into submission. The tactic has repeatedly failed, and beyond the matter of human rights, it strains the Chinese military and shames the Chinese government's face.

China and the United States have both found Chen's pro-independence rhetoric frustrating; the US has been hoping for an extended status quo, and the Chinese have looked for reunification for fifty years. Ma seemed in danger of losing the Taiwanese election due to the Chinese crackdown in Taiwan; the DPP hoped to use the crackdown as a symbol of China's brutality and danger. There was some temporary shift in polls pre-election, but the Taiwanese voted in droves for Ma in promises of improved economic ties to put a kick in Taiwan's economy.

But this PRC victory is one of few in recent months. The Tibet uprising is growing, not shrinking; the PLA crackdown is not only bringing international support for Tibet and risking Olympic boycott, but it is rallying even reluctant Tibetans to the cause of resistance (except, of course, the Dalai Lama, who asks only for an end of violence and increased religious freedom). The PLA is struggling to deal with the wide and dispersed Tibetan resistance.

Whether the PRC is planning to use tactics beyond military suppression to deal with the Tibetan uprising is not yet known.

But China's problems may be getting worse. Even with economic growth, China's income gap between its west and its coast is growing dramatically; the Chinese west remains largely left out of the 9% yearly growth enjoyed for decades straight. But the current economic growth is fragile. Oil prices are extremely high, and China's demand for it continues to explode. Inflation is getting out of control: 8.7% in February alone. While Taiwan may be opening economic ties, this won't happen until late May, and China is in danger of boycotts from both its actions in Tibet and its unlucky string of dangerous export incidents (dog food, toothpaste, and Barbies). Finally, US investment banks, facing hard times, are likely to pull back their investments in the near future; knowledge of that may cause smaller Chinese companies to struggle. The combination of the Tibet unrest and potential economic downturn may become a perfect storm come June 4th.

photoshop trick.
pretty obvious.
better use something real next time.

don't you feel ashame of what you are doing?

Or are you really retarded???