Mingora has been called "Taliban City" over the past few years. While the Taliban have a large presence in many districts of NWFP and FATA, this was their power base. But the Pakistani military offensive has proven either brilliant or lucky over the past month, leading to an increasing likelihood that the military will score a shattering victory over the Taliban in this particular offensive. I'll discuss below a few points of interest.

Taliban Hubris and Error: The Taliban grew incredibly confident in their ability to walk all over the Pakistani government over the past few years, and they reverted from their insurgent campaign to a largely-conventional stance in many areas, Mingora included (the advantage of a conventional stance is that it is easier to suppress and control the population, set up a government, costs less to operate: one does not need to hide in caves, etc). But such a stance makes the Taliban incredibly vulnerable to a better-trained conventional force. With the incoming Pakistani offensive, the clever thing to do might have been to slip out to fight another day, leaving traps to greet the incoming soldiers--Army personnel would have died (in some number) and spent a great deal of time pouring house-to-house to find nothing. It would have been tough on morale, and allowed the Taliban to regroup and re-assess. But the Taliban--many of them--chose to tough it out and fight house-to-house, and all reports indicate that they're being crushed. Those that chose to escape have a surprise in waiting...

The Commando Raid: 300 or so Commandos from the Pakistani Army raided a Taliban base located 14 miles to the north of Mingora over the past two weeks. The fighting was difficult--massive trench and tunnel networks in the mountains prevented large ammunition from having any effect, so the Commandos had to eliminate Taliban the hard way. But the Army claims that the raid was successful. In all likelihood, paramilitary and Commandos await the arrival of fleeing, disorganized Taliban that hope to seek refuge in the mountain base. If this is the case, it would be an incredibly efficient and effective use of force. The Commando raid is going to be a 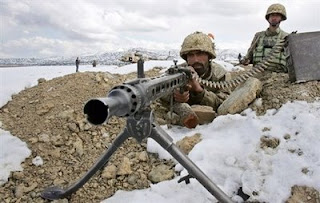 particularly effective bolster to domestic support: the camp was used as a training ground for forcibly recruited children to make them suicide bombers--dozens of children were rescued. PR doesn't get much better than that.

House-to-house in Mingora: There are about 10-20,000 civilians trapped in Mignora, which is making the fighting incredibly slow and deliberate. But from what little reporting I've dug up, the Army seems to be in possession of most of Mingora, having killed about 1000 militants (and having lost about 50 of its own). These numbers may be wrong, but time will tell. Nonetheless, civilian casualties seem to be extremely low, and Mingora appears to be all but captured. If civilian casualties are kept to a minimum, then the Army will have proven itself to its people as capable of dealing with the Taliban threat--and the days of ineffectual "peace" deals will be over. The Army would have the opportunity to turn on its toes and continue pursuit all the way to the Afghan border. 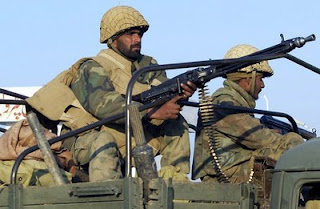 Pushing North:The Pakistani military has taken two significant towns to the northwest of Mingora, as well. The choice seems to be an attempt to not only isolate the Taliban in Mignora from reinforcements and resupply, but also to capture or kill any escaping militants--such a move would be a sign that Pakistan is putting as much effort as possible into making this victory as decisive as possible.

Steadfast Commitment:Maj. General Abbas, who leads the Pakistani army's PR department, has made it clear through a number of press statements that the Pakistani military is committed to continuing the campaign. The recapture of Swat will be the beginning: he has claimed that it will be a "blueprint" for other areas, specifically Khyber, North and South Waziristan. 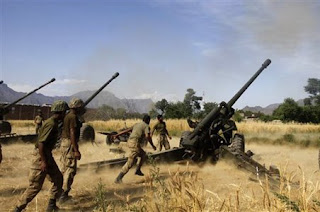 These three provinces all border Afghanistan, signaling that the Pakistani government understands the need to eliminate Taliban influence throughout the AfPak region--rather than just the buds growing near Islamabad. And if this operation ends as well as it has begun, the army will have all the political support it needs to get the job done.

Fighting for Freedom: Their confidence bolstered by the coming success of the Army's campaign, villagers in Pakistan are taking up arms against the Taliban in hopes of driving them out (knowing that reinforcements will not be coming for their regional overlords). Such a move is a bit dangerous--if it fails, it will spell disaster. But there exists a tipping point, at which if enough villagers do indeed take up arms against the Taliban, the Taliban's ability to deal with such uprisings will be overwhelmed, and their control over any area with such a critical mass will 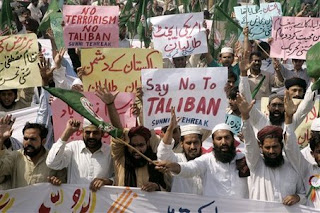 collapse. If they're thinking on their toes, Pakistan should be pushing their paramilitary forces to these areas to support and encourage disruption in the Taliban's power base, which would further degrade the Taliban's organization (and reduce support to the Afghan Taliban).

The Future: A Full Pincer Offensive? If the Pakistani military is going to push into Waziristan and Khyber, then the Afghani Taliban is certainly going to lose critical support from its rear, making it more vulnerable than it has been in years. The Afghani Taliban is much smarter and more hardened than its Pakistani brethren--it has been fighting NATO since late 2001. It remains in an "insurgent" stance, but the strength of such a stance often depends on some base from which insurgents can receive weapons and ammunition, supply, etc. With NATO in control of areas north of Taliban territory, a Pakistani Army conquering of NWFP and FATA could potentially leave the Afghani Taliban without a route through which to bring arms and ammunition, making the fight (at worst) a war of supply attrition, which NATO could easily (if slowly) win. It is unclear whether the people of Pakistan see the Taliban as a sufficiently deadly enemy that they are willing to put aside their long-standing sourness towards the United States, but if they are, the cooperation between Afghanistan, Pakistan, and NATO would likely together be enough to scatter the Taliban and finally begin to provide real security.
Posted by Unknown at 9:37 AM