Short: Illustration of the Rebels' Slow March in Aleppo 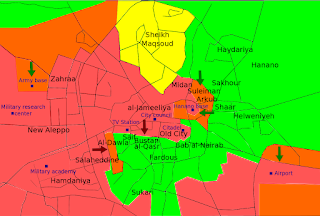 Mid-Oct 2012: Resupply and reinforcement of Syrian regime troops has denied rebels access to the international airport and driven them back from the main army base in the west. Counter-attacks occur throughout the front in downtown. 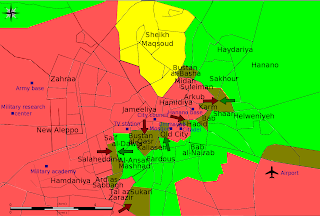 Mid-Nov 2012: Rebels push in from the northwest, attempting to push towards the critical air defense and army bases. The front line in the center of the city is a mess but is largely not moving. 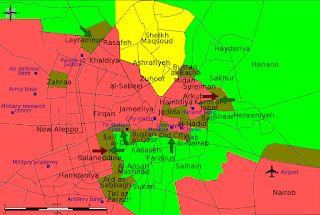 Mid-Dec 2012: Minimal movement of the front lines in the center of the city, which has become a meat-grinder. Painfully slow rebel progress in the northwest, attempting to inch towards the army base. At this point, Rebels have massively limited the regime's ability to reinforce and resupply Aleppo--predictions at this point were that Aleppo might be surrounded and fall within the next few months. 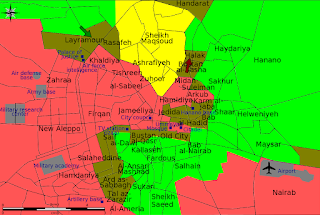 Early February 2013: A long gap between maps because front lines just had not moved much. Rebels, in early February, make a massive push in the south and east (as of Feb 12, they may have broken regime defenses around the international airport, as well as seized another air base near Aleppo (not pictured on the map), but may abandon it if it's going to be bombed). The regime, on the other hand, is pushing rebels back in the center of the city and seems to have a major advantage there. 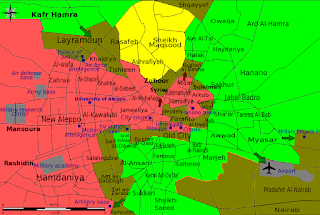 If the rebels can consolidate gains in the airport region and cut off regime troops there, they may be able to spend the next few months (yes, it'll be slow) encircling from the south and the northwest. It appears to be their strategy--the press into the southeast has been somewhat sudden and may signal a more sophisticated approach to trying to take territory--fighting on these outskirts will be quicker and less deadly than in the center, and these outskirts hold more military bases, including an artillery base (currently under threat of capture by the rebels), military intelligence, an air base, an army base, and the military academy and research center--it's almost certain that each of these serve as strategic strong points for the regime, and would be much higher-payoff targets than city-center blocks (which are largely bombed out shells now) that they seem to be giving some ground on.
Posted by Unknown at 1:22 PM