The Iran Deal is a BFD

Joe Biden was famously caught on camera calling the passing of the ACA a "BFD;" I suspect he said something similar as Secretary Kerry came back with news that a deal had been inked with Iran.

This is a pretty BFD. As you can see, Secretary Kerry certainly thinks so. (These guys are probably really, really tired.) 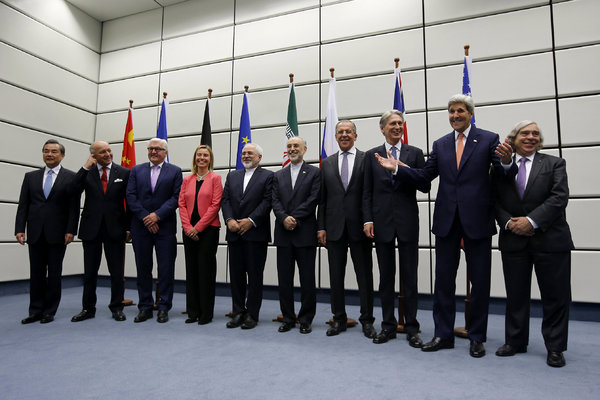 I read through CNN and the NYT's summaries of the deal; I then decided to skim the full-text.


Immediate Implications of the Deal:
The deal looks a lot like what was hammered out in April, and we discuss the key points in an earlier post. In the new version, Iran is actually restricted for 15 years (rather than 10), but gets a greater number of centrifuges (giving up 2/3 of them rather than 4/5 of them). It keeps its stockpile to 300kg (which is a 98% reduction of its current stock), ships out all spent material, and can't enrich beyond a pretty low number.

The deal still looks good. A look at the full-text suggests the inspection protocols are pretty solid: the IAEA gets to maintain permanent access, and can visit facilities "daily."

If Iran starts breaking the deal, the sanctions can "snap back" with a quick vote from the Western powers. The Western powers are banking somewhat on Iranian domestic support for trade with the West--Rouhani was elected president riding on promises to lift the (very painful) sanctions from Iran, and if they snapped back due to Iran breaking the deal, it could lead to more unrest (like the Green Revolution).

Could Iran still hide some activity and create a bomb? Sure. But their break-out period (amount of time required to build a bomb) for the past 2 years has been 2-3 months, and now it'll extend to 1 year. Iran's had the capacity for a long time to sneak around and build a bomb; this sets them farther back from being able to do so, and increases IAEA presence (from essentially none, currently) to look for any such clandestine activity. In short, I think any objections that this is a tacit thumbs-up for Iran to build a bomb are just unfounded.

Credible Objections:
Probably the big credible objection is by Sunni allies worried about Iranian power. Saudi Arabia was hoping that Iran's foray into Yemen would become a quagmire that drove it into financial ruin. The Saudis have also been intentionally keeping oil prices low (by keeping supplies high) in order to strain Iran further: they're engaged in economic warfare designed to "break" Iran's capacity to project power, and the lifting of the sanctions will undermine that.

That's not untrue, but it's also unlikely that the sanctions were preventing Iran from projecting power into Iraq and Yemen. The key goal of the sanctions wasn't to grind Iran into insignificance--that was not going to happen with this package. The key goal was to hurt Iran enough to make a Western-friendly deal, and that worked.

Why This is a BFD:
If we model Iran more like a Soviet Union than a large mob of irrational terrorists (and I think the former is a more accurate model), we can think about Iran's self-interest, and what a self-interested power (even one opposed to the US) would want.

The lifting of sanctions means foreign investment and an alleviation of inflation (currently 18.2%); Iran's economy stands to gain a lot. Iran's been very clear that it wants trade with the West.

As this investment pours in, as Europe starts buying Iranian oil and Iran starts buying European food and goods, we start to see two big things happen:
1) The US and EU will become bigger trade partners for Iran than Russia and China (this will take a few years but less time than this deal's restrictions)
2) Iran will start to become a source of oil for the EU

#1 is important because Iran is going to ally with those that serve its interests. It is currently allied with Russia for that reason--not out of any weird ideological alignment. The Western powers want to steal Iran out of Russia's sphere of influence and put it in the West's. The West has many more carrots to offer Iran, and this is a key first step to being able to do that. (To anyone who believes this is impossible, I suggest a reading of the history between the US, Soviet Union, and China throughout the cold war to see how friendships shifted based on interest, despite ideology. Remember also that Saudi Arabia, a close ally, is a religiously extremist, oppressive monarchy.)

#2 Is important because it changes incentives for Iran with respect to the Strait of Hormuz: if Iran is exporting oil to Europe, it would hurt itself by closing the Strait of Hormuz and, per #1, would have less interest in doing so as a favor for Russia. This alleviates some of Europe's dependence on Russia for oil, and means they're more likely to have alternate sources from Qatar, UAE, Iran, and Iraq if conflict with Russia ever arises. And that means hamstringing Russia in Europe.

So as odd as it may sound, the reason the Iran deal is so important is that it helps the West increase its leverage over Russia, which is a much larger, scarier, more menacing, and more aggressive threat than Iran. The Great Game in Europe is back, and this move by President Obama and Secretary Kennedy may be seen by history as a truly brilliant stroke.
Posted by Unknown at 10:04 AM