Petraeus to the Rescue Again

The Senate confirmed General Petraeus to lead Central Command (covering the entire Middle East), 95-2. His deputy General, Lt. Gen. Ray Ordierno, has been promoted to General of Iraq operations, ensuring that Petraeus will have a strong say and a competent, experienced sidekick for the US' biggest war since Vietnam. 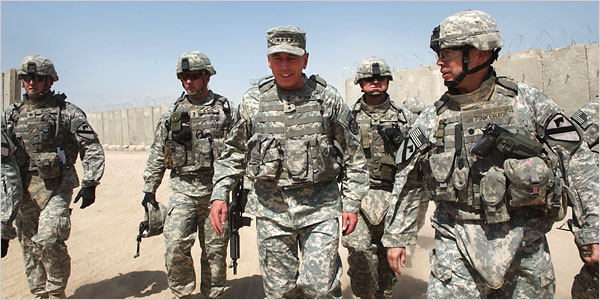 Going to Save All Our Other Messes, Too
I'll bet that the Senate is hoping, like I am, that Petraeus has enough magic in his bag of tricks that he can pull Afghanistan out of the terrible mire it's run into, just as he did Iraq. It will be harder, much harder. For all that Bush complains of Iran's intervention in Iraq, they are a stable state with control that can rein in their own hounds--and they largely have. Pakistan has no power over the Northwest, and won't let the US operate there. The Taliban literally have an impervious fortress from which to operate in Pakistan's northwest. I don't know how Petraeus plans to deal with this.

But Petreaus now also gets to watch over Iran. His recent successes do not prove that he knows how to manage Iran's entire repritoire of threats and irritations, but he has certainly beefed up the US Army's credibility against insurgent warfare that Iran can't depend on Hezbollah or its other Shiite puppets for free pecking of US interests any longer.

The Senate's confidence in him is well-founded, surely. And it shows a surprising ability to change opinions based on reality. I'm sure many of us remember the left-wing response to Petraeus' initial appointment:

But those days might be over. Not only is this man finally getting a shred of the respect he deserves, but the US Senate is not so ideological as to shoot its own military policy in the foot to make a point. And who knows: maybe he'll come to the rescue for us once more.
Posted by Unknown at 7:33 PM