Even in the past few days, we've seen escalation in the Little Wars.

As things heat up near Mariupol, Russia is adding command-and-control assets, air defense, and artillery to its border with Ukraine. NATO thinks Russia is readying for a new Ukraine offensive. Russia has rightly calculated that it's going to continue to get away with its offensives; the EU and US will neither provide arms nor guarantee Ukrainian sovereignty, which is about all Russia needs to feel invited to roll in.

Russia is also sending supersonic strategic bombers to Crimea, both establishing their hold over the area and getting some pretty deadly hardware as close as they can to Kyiv, just in case.

It's not that the West isn't responding in some ways. The US and Canada are throwing a bit of money at the problem, and the US is putting money into counter-propaganda in eastern Ukraine, where Russia is currently drumming up support by alleging systematic murder of Russian ethnic people by a fascist Kyiv government.

US warships are now escorting American-flagged cargo vessels through the Strait of Hormuz to prevent Iran from nabbing any more. This means a heavier, bristling fleet presence in Iran's territorial waters, which ups the ante and is probably designed to establish status quo US presence there, with Iranian aggression as the pretense. We'll see how Iran responds--there's not much they can do directly, but like the capture of the Maersk, they may find another way to be a thorn in the side of the US. Iran's motives for capturing the vessel are still unclear (and the public statements are highly dubious). 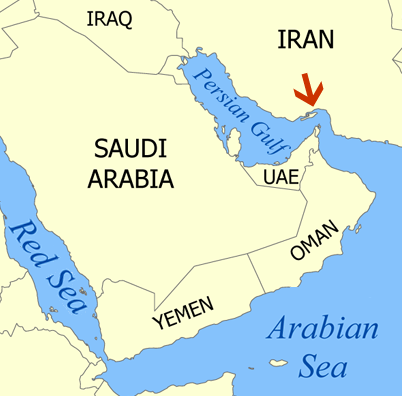 Iran is currently close to Russia in part because Russia does not have sanctions on the country, and Russia wants to keep it that way.

If the Iranian nuclear deal works, the West will start trading with Iran again, which would be a huge boon for the economy. Frankly, the massive US/EU markets provide a much more appetizing treat for Iran than the sluggish Russian petro-conomy. Iran has more than enough petrochemicals and doesn't want vodka.

So Russia (and China) might actually be trying to "nuke" the deal, as it were. Forbes' Russia-China expert talks about it here (thanks to reader Nathan for pointing me to this).

The US could soften/weaken the alliance between Russia and Iran with the deal, as well as finally have access to Central Asia (also under Russia' indirect control), which would be a huge boost in the Great Game.

Could the nuclear deal happen? Sure: the US and Russia made all sorts of similar deals throughout the Cold War, even while facing off in places like Korea, Vietnam, and Afghanistan.
Posted by Unknown at 1:14 PM