Tikrit Falls to Iraqi Forces; US Solidifies Role as Leader Against ISIS 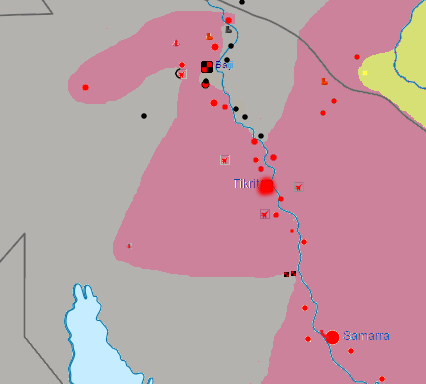 Mop-up operations are underway, but the Iraqi national flag now flies over the city, and ISIS is broken.

Iraqi forces should be moving quickly north to secure the Baji road and oil refinery before securing, regrouping, and supporting Ramadi to make sure the ISIS advance there is halted. And then, of course, there will be a few-months' ramp-up to take Mosul.

The advance into Tikrit was halted around March 6th as the army/Shiite militias faced heavy sniper fire and dug-in pockets of resistance.

US airstrikes started up just under a week ago after the Iraqi government requested the support to break ISIS resistance. Those airstrikes prompted most of the 20,000 Shiite militiamen--who generally don't like the US and see themselves as more closely aligned with Iranian interests--to boycott the siege and go home, leaving about 3,000 Iraqi Army troops, 1,000 Sunni fighters, and about 2,000 Shiite fighters. It left a lot of glaring holes in the siege.

But the airstrikes proved decisive.

After softening ISIS targets (which had probably thought themselves unlikely to have to face such airstrikes), the US suspended its operations and the Shiite militias quickly came back to launch the final assault.

The city fell one day after the air campaign, after 3 weeks of no progress.

The US is gloating a bit, and with good reason. US officials are taking the opportunity to show that Iran can't alone support the Iraqi advance. This is a precedent-setting kind of event: the US was "snubbed" last month when Iraq's government moved into Tikrit with Shiite militias and Iranian ground support, without informing the US or requesting support.

Giving in to request the support was a sign the Iraqis had realized they need it. The fact that the city was taken so quickly after the strikes cements the US' future role.

This means one of two things: either the US and Iran will work more closely together, or the Iranians will have a much-reduced role in the Iraqi offensives in the future.

This cementing also means that the US is going to be leading the assault on Mosul, which is about 20x larger than Tikrit and has many more ISIS fighters dug in. It's clear that the Mosul operation is a non-starter without that air support.

Shiite militias will make a lot of noise about not needing the US, but I do believe that Tikrit will be weighing heavily on their minds when they are planning the Mosul advance, and that despite the high tensions, the militias will begrudgingly go in with US air support.

It's worth noting: Tikrit probably had far more than the 2,000 ISIS fighters initially estimated--the Iraqi government cites about 13,000, but this is probably inflated. The good news is that this means the Iraqis have shown that they can win with about 2:1 odds, rather than the 10:1 or 15:1 previously thought. Mosul also has about 12,000 ISIS fighters, so the fight will not be an order-of-magnitude difference (though will obviously take much longer and be more complicated due to Mosul being about 20x larger in land mass).

But ongoing US airstrikes are making it hard for ISIS to dig in as deeply as it would like, and the ISIS governor ("Prince of Mosul") and Mosul's top ISIS military commander have both been killed by airstrikes.
Posted by Unknown at 11:27 AM