Thanks to reader Tom G. for the inspiration on this one.

I continue to be convinced that Putin's Russia has its sights on the Baltics as it looks to expand its "sphere of influence" back to Soviet days (The Economist has its own take on this idea). This isn't for completely arbitrary reasons: as we discussed way back in 2011 in the series (probably my favorite from my rapidly-approaching-400-posts) on the Blocanization of Europe, and again in May 2014, Russia is not doing this for arbitrary reasons.

Its natural security, according to the "realist" International Relations school, depends on its ability to keep its industry, natural resources, and population centers secure, and that means land buffers (as well as other defensive measures like tactical nuclear weapons, air defenses, etc) between NATO and its core.

And note that all this stuff is jammed right up on its western border (below is a map of population density in Russia). 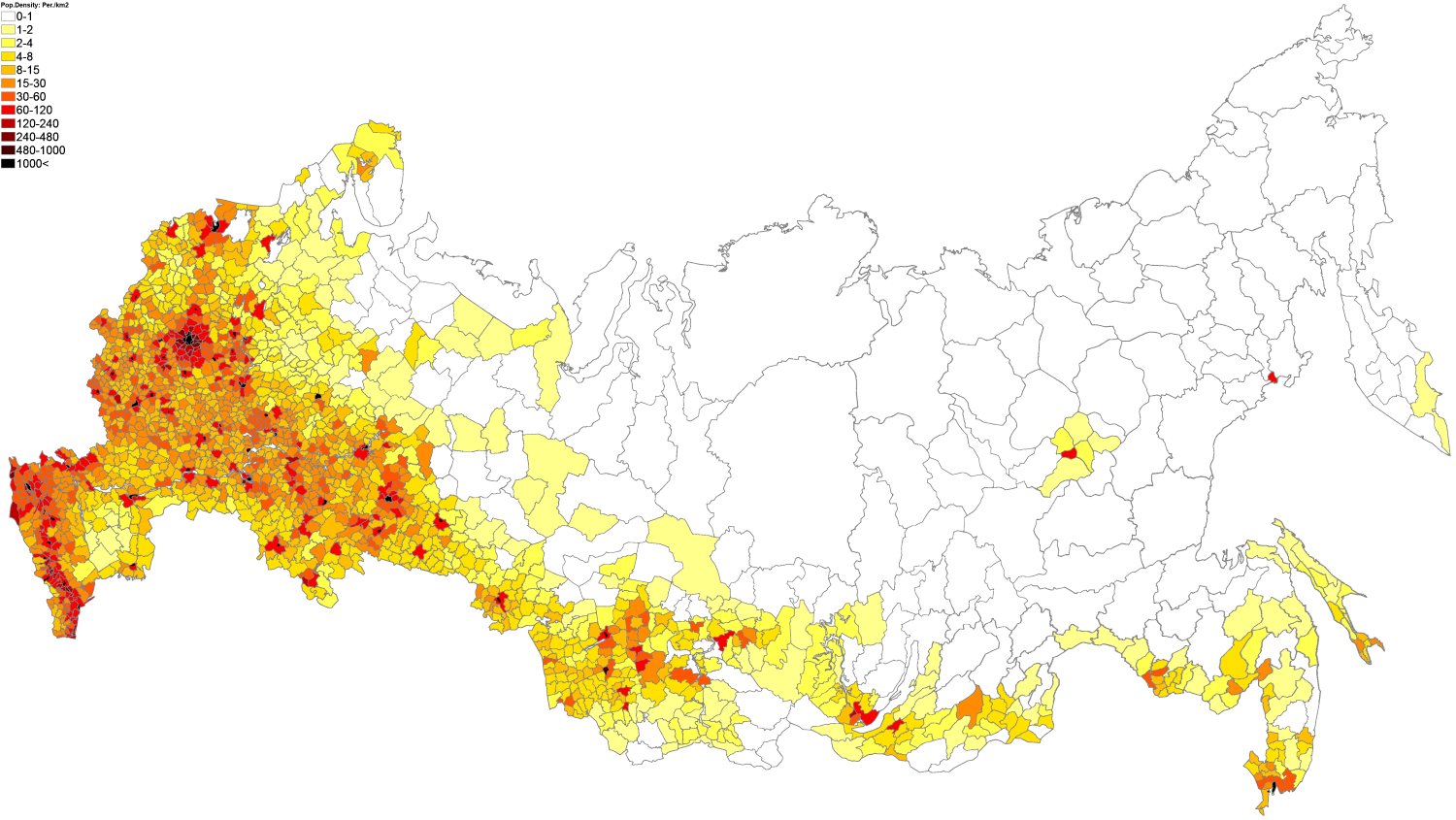 We also discussed why holding Sevastopol was important: to have access to a warm water port that Russia might have lost had Ukraine gone into NATO. Putin made it all-but-clear that this was the motivation for invading Crimea when he said recently that Russia decided to annex the territory when Ukraine ousted President Yakunovych: while the propaganda was about "protecting Russian citizens" (a la the Sudetenland), the reason to focus first on Crimea was about the Sevestapol warm water port, and the risk that the new pro-EU Ukrainian government would wrest it from Russia.

Putin's declaration of a "New Russia" in eastern Ukraine is creepily akin to Hitler's "Lebensraum," particularly because it has the same motivations. Hitler did not want Eastern Europe simply to have more territory: it was about security.

But not all is secure in Russia even if it does settle with Ukraine in the way it wants (and it will, I think). St. Petersburg remains at serious risk from NATO's presence in the Baltics, and pulling the Baltics under Russia's control is arguably even more important than having eastern Ukraine. It's just not on the table yet because Russia is using Ukraine--a non-NATO country--to test NATO's will.

(And we still remember the Georgian invasion and the successful annexation of Abkhazia and South Ossetia, yes?)

But the Baltics are NATO Countries--Could He Really Take Them Over?
Sure. Putin is excellent at messaging, enough so that even today the West is still trying to make the case that Russia has sent troops into Eastern Ukraine (rather than it being so widely believed and obvious that nobody talks about whether it's true anymore). Putin is clever enough to not simply declare war and march in.

In Ukraine, Russia has used non-uniformed troops (the famous "little green men") in both Crimea and eastern Ukraine, and has focused on arming annexationist rebels to keep a shroud of plausible deniability. Its efforts in both Ukraine and Georgia have been nothing short of brilliant.

But even if it did invade directly: Estonia and Latvia are tiny, and Russia could overwhelm them in hours. It's already frequently conducting military exercises on the border, any of which could turn into an invasion--Israel famously used this tactic in the six-day war. And if it does invade and deploy extensive anti-air defenses, NATO would have to commit to a bloody, protracted campaign to defeat Russia militarily in order to get them to back off. And much like Germany in 1939, Russia has good reason to believe that just won't happen. So after it wraps up Ukraine, it might just go ahead with the Baltics, after the heat has died down and the Americans have become too distracted in the Middle East to mount a credible response.

Hold On: Why Do You Keep Comparing Putin to Hitler?
Putin is obviously not a madman hellbent on committing genocide upon an entire race of people, so don't take it the wrong way.

But Putin is interested in taking over swaths of Europe, and for similar reasons as the Germans. It's worth noting that Germany had gone to war with its neighbors many times before WW2 in its short history as a unified nation, for always the same reasons: security. Putin's "testing the West" behavior is similar to Hitler's in the 1930's, and the propaganda of "protecting ethnic peoples" is similar. The West's response is note quite as weak as in Munich, but Russia is willing to deal with sanctions, and support for Putin remains over 80% even as the economy takes a major hit. His absolutely brilliant propaganda campaign is galvanizing the Russian people for an ongoing war with the West. Sanctions aren't a deterrent, and won't be: pretending they will be is probably naive.

Back to Business: Aren't NATO Countries Obligated to Act?
They're obligated to act, but as the Economist points out, Article V leaves ambiguity in the type of action member states are obligated to take. It doesn't require that NATO countries use military force, which is important. Russia has held off so far invading NATO countries, but it's running out of buffer-states to build without going to NATO countries like the Baltics for that security it craves.

The Baltics and the Visegrad 4 are both taking matters into their own hands as their confidence in NATO wanes. The V4 formed their own battle group, independent of NATO command. The Baltics are stepping up defense spending as Russia flies daily "exercises" near their borders. They're losing confidence in NATO's willingness to defend them. Sadly, the Baltics are not going to be able to resist Russia's invasion, but they may be depending on the V4 to act when NATO doesn't: Joe Biden actually went to Poland to keep Poland from leading the V4 against Russia when it invaded Crimea.

Germany wanted to station troops in the Baltics as a response. This would put NATO lives on the line, meaning that Russian attacks would risk killing NATO military personnel--increasing the impetus to go to war for NATO--essentially a form of deterrent. This was shut down in Brussels.

So What's Going to Happen?

The question, as usual, is ultimately about deterrence: does Russia believe the US and NATO will get alarmed enough to shed blood over Russia's next military move? Ultimately: did Putin see oh-so-much wormlike behavior in Minsk? If so, deterrence has failed.

On another note, the Blogger search feature is actually quite impressive. If you want to do a deeper-dive on any serious topic like Russia, Iraq, Afghanistan, ISIS, etc, I've pretty-enthusiastically tagged everything I've written, so a simple topic search will get you some rich and historical stuff.
Posted by Unknown at 10:57 PM